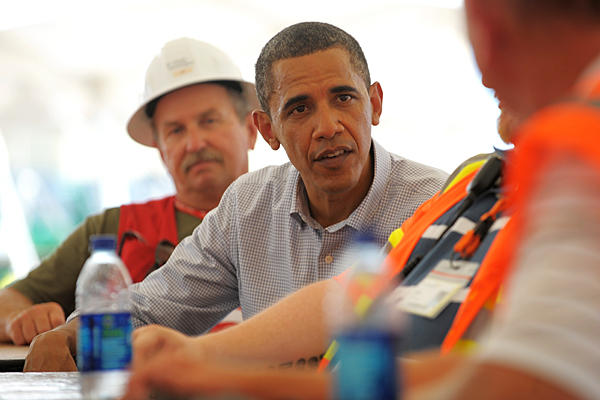 President Obama will address the nation from the Oval Office for the first time Tuesday night in a bid to convince the American public that, in his response to the Gulf oil spill, he is more Lyndon Johnson than George W. Bush.

For weeks, Americans have been clamoring for Mr. Obama to show moreÂ outward resolve and leadershipin facing the crisis. In short, it has been asking him to be more like President Johnson, who did not merely respond to hurricane Betsy in 1965, he became personally and politically invested.

Upon arrival, he shouted his speech from the airport tarmac because there was no electricity for microphones. At one point during a tour of the flooded city, he ordered a Secret Service agent to go find a bottle of water for a parched woman. Then, upon departure, he took direct control of the relief effort.

IN PICTURES: The Gulf oil spill’s impact on nature

Thirty years separate that moment from hurricane Katrina, which many political scientists pinpoint as the beginning of the downward arc of the power and popularity of the Bush presidency. Mr. Bush at first only flew over the city, not deigning to land. The relief effort that followed was slow and chaotic.

Once again, that fecund coastal curve is testing a president’s crisis-management credentials, and for Obama, Tuesday’s Oval Office address is an attempt to have his “Johnson moment.” The gravity of Oval Office addresses indicates once and for all that Obama is taking ownership of the crisis.

He is expected to speak about the administration’s long-term efforts to restore the Gulf Coast, as well as his plan to have BP createÂ an escrow fund from which all damage claims would be paid. With Obama set to meet with BP officials Wednesday, the Oval Office speech is a clear effort to heapÂ more pressure on BP ahead of the meeting.

Yet the speech also indicates that Obama is still trying to shape the Gulf oil spill relief effort in his own image.

Even as he employs carefully chosen curses and plans more trips to the Gulf, Mr. Obama is in many ways pushing back against the image of Johnson on that tarmac, bellowing his defiance. Obama’s famous “whose ass to kick” quote widely cited as a sign of newfound edge was, in fact, part of a defense of his studious strategy: Assess the situation, put the best people on the job, and monitor them.