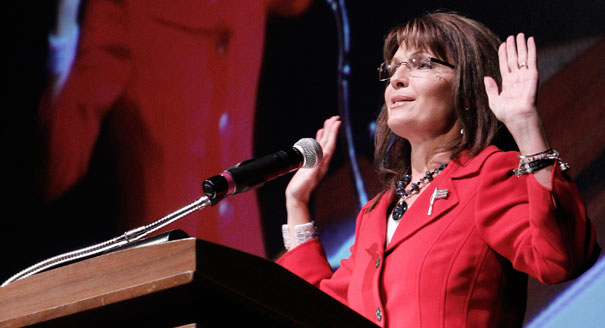 Sarah Palin gave her clearest open flirtattion yet with a presidential run today, saying there’s “no one” more qualified for that type of multi-tasking job than “a woman, a mom.”

After saying she’s still considering it but doesn’t have an answer, Palin told a gathering of Long Island business officials that no one immediately comes to mind for who she would back if she doesn’t run.

â€œI donâ€™t have a name to give you right now, but what I would look for in character is someone whoâ€™s been on the front lines understanding how to administer and how to lead a team. … Gosh, nobodyâ€™s more qualified [for the] mujltitaksing than a woman, a momâ€¦ whoâ€™s administered locally, state, with energy isues, so maybe a mayor, a governor maybe.

During her appearance before the Long Island Association, a rare, free-wheeling public appearance for the former Alaska governor, Palin stood by her support for the “freedoms” in gun-buying that exist today. She said she prays for the “full recovery” of Rep. Gabrielle Giffords but that her would-be assassin was “an evil sick person” who was intent on “fulfilling his mission.”

Asked about last month’s shooting in Tucson â€” and the Long Island Railroad shooting that claimed the life of Rep. Carolyn McCarthy’s husband Dennis in 1993 â€” Palin said “there are already on the books many gun control measures and I do support those. … “I donâ€™t support taking away even more freedoms from the good guys. â€¦The bad guys arenâ€™t going to follow the laws that are on the books today. Theyâ€™re not going to follow any new laws that are put on the books either.”

Certainly out hearts go out to the victims and pray for the full recovery of Gabby Giffords,” Palin said, adding, “the criminal, he was an evil sick person. And adding another law to the book would not I believe have prohibited him from somehow some way fulfilling his mission and the mission he was on was to harm fellow human beings.”