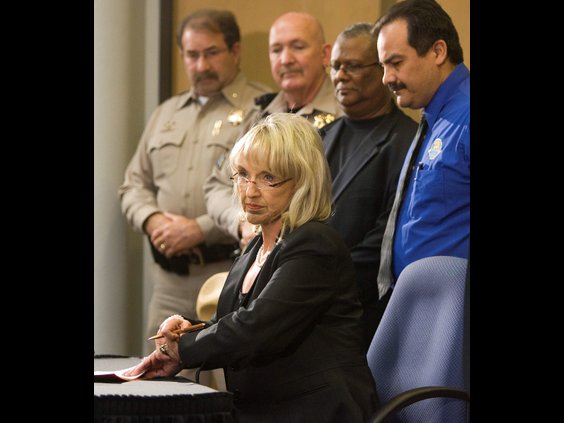 PHOENIX (AP) — As calls spread for an economic boycott of Arizona, the state’s governor enlisted the help of former vice presidential candidate Sarah Palin on Saturday to defend a new law cracking down on illegal immigration.

Jan Brewer and Palin blamed President Barack Obama for the state law, saying the measure is Arizona’s attempt to enforce immigration laws because the federal government won’t do it.

“It’s time for Americans across this great country to stand up and say, ‘We’re all Arizonans now,'” Palin said. “And in clear unison we say, ‘Mr. President: Do your job. Secure our border.'”

The former Alaska governor appeared with Brewer at a brief news conference on Saturday. The event launched a website that Brewer said was an effort to educate America about border security and discourage an economic boycott of the state.

The site, funded by Brewer’s re-election campaign, shows pictures of Brewer and Palin and invites visitors to sign a petition opposing boycotts. It includes a list of politicians and organizations calling for the boycotts and asks visitors to call or e-mail to “let them know that you support Arizona.”

“Our purpose today is to help the rest of the nation understand the crisis which confronts our state,” Brewer said, citing the presence of human and drug smugglers.

“I think for most American people the reaction to this would be, ‘Why haven’t the police already been doing that?'” Palin said.