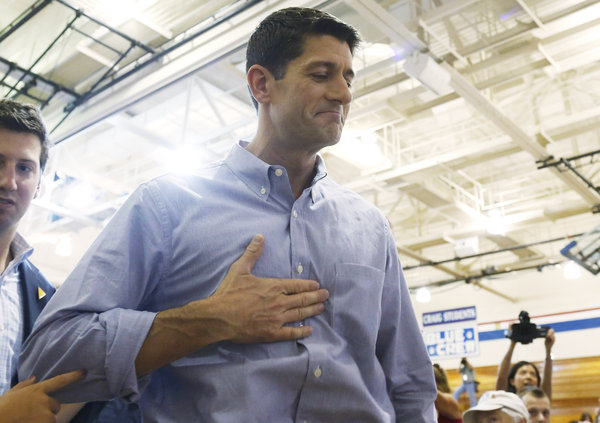 Appearing from a high school track near his home in Janesville, Ryan promised Foxâ€™s Bret Baier that theRepublican National ConventionÂ would give the American public a chance to see how a Romney-Ryan ticket would â€œget the American idea revived.â€

â€œWe have positive ideas and solutions for a better future,â€ he said. â€œThe president is on the campaign trail attacking â€“ thatâ€™s what youâ€™re going to see all fall. He canâ€™t run on his record, so all heâ€™s going to do is attack.â€

Ryan was interviewed on a hill near where he ran track in high school and takes his children sledding in the winter, waxing poetic about the charms of his hometown.

“I can get in my tree stand within about 20 minutes of leaving my house,â€ he said.

Earlier Tuesday, he spoke to voters from the gym of the high school that crowned him prom king in 1988, with his large extended family filling some of the seats.

In the interview on Fox, Ryan also defended Mitt Romneyâ€™s tax plan, which he said would eliminate loopholes.

â€œInstead of having Washington pick winners and losers, weâ€™re going to plug those loopholes and lower tax rates for everybody,â€ he said.

When asked why the Romney campaign had not been more specific on details about this plan, Ryan said the campaign wanted to have a discussion in Congress about taxes.

â€œWe want to go through a transparent process in Congress where we have a dialogue with the public,â€ he said. â€œThere are aÂ  lot ofÂ DemocratsÂ who agree with us.â€

Ryan reiterated his stance on rape after being asked in recent days about a bill he co-sponsored with Rep.Â Todd AkinÂ that initially used the phrase â€œforcible rape,â€ but was rewritten after complaints from womenâ€™s groups.

â€œRape is rape, period, end of story,â€ he said.

Ryan also told Baier that a Romney-Ryan administration would be more hawkish onÂ Iran, a position the campaign has made clear before. He said he was concerned that the United States was beholden to the U.N. Security Council, and specifically members Russia and China, for matters of national security.