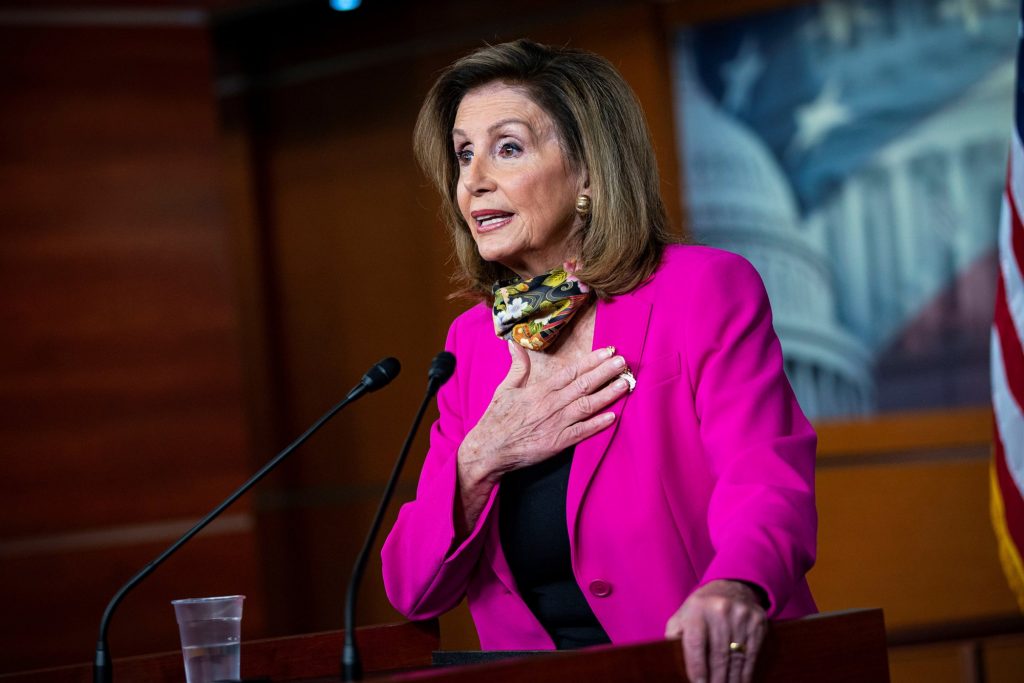 House Speaker Nancy Pelosi, D-Calif., on Sunday would not rule out impeaching President Donald Trump or Attorney General William Barr if the Senate seeks to push through a Supreme Court nomination during the lame-duck session should Joe Biden win the November election.

Speaking with ABC’s “This Week,” host George Stephanopoulos asked Pelosi about suggestions some have made that if Democrats win this fall and Republicans move forward on a Supreme Court nominee to replace the late Justice Ruth Bader Ginsburg, the House could move to impeach Trump or Barr in an effort to stall the nomination.

“Well, we have our options,” Pelosi said. “We have arrows in our quiver that I’m not about to discuss right now, but the fact is we have a big challenge in our country. This president has threatened to not even accept the results of the election with statements that he and his henchmen have made.”

Stephanopoulos followed up, asking if she was not “ruling anything out?”

Pelosi also pointed to upcoming Supreme Court arguments on the Affordable Care Act, set for Nov. 10, just after the election. Ginsburg’s death means one of the justices who voted to uphold the law in 2012 is no longer there, and Obamacare’s future may now be in peril as a result, particularly if a conservative-aligned justice is confirmed before then.

“So the president is rushing to make some kind of a decision because he … doesn’t want to crush the [pandemic,] Pelosi said. “He wants to crush the Affordable Care Act.”

This weekend, Trump pledged to quickly fill the now-vacant Supreme Court seat and nominate a woman to it following Ginsburg’s death Friday due to complications from pancreatic cancer. A frontrunner for the position has emerged in the form of federal appeals court judge Amy Coney Barrett, 48. Senate Majority Leader Mitch McConnell, R-Ky., has promised to quickly begin the confirmation process once the president makes his selection.

Democrats have sharply criticized McConnell, who refused to hold any hearings for then-President Barack Obama’s 2016 Supreme Court nominee, federal appeals court judge Merrick Garland, citing that fact it was an election year and that the American people should have a voice in the selection.

McConnell said there was not a contradiction in his two stances because the Senate and White House were under control of differing parties at that time, where as now Republicans control both.

“In the last midterm election before Justice Scalia’s death in 2016, Americans elected a Republican Senate majority because we pledged to check and balance the last days of a lame-duck president’s second term,” he said in a statement. “We kept our promise. Since the 1880s, no Senate has confirmed an opposite-party president’s Supreme Court nominee in a presidential election year.”

The argument didn’t hold water with Democrats, who pointed to remarks from Republican senators like Lindsey Graham who have said they would not consider a Supreme Court nomination in an election year.

“Today it seems that Senator McConnell has lost his faith in the judgment of the American people and wants to hurry up and put somebody on the court,” former President Bill Clinton told “This Week.” “And the president does too. So they — their position is ‘do whatever maximizes your power.'”

On NBC’s “Meet the Press,” Democrats demanded no confirmation this close to the election.