Peter King — What makes him tick? 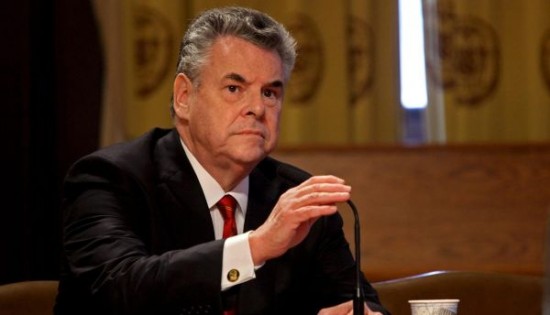 Washington (CNN) — Walk into Rep. Peter King’s Capitol Hill office, and you are overwhelmed with how much the September 11, 2001, attacks consume the New York Republican. There are photos on the walls of funerals he attended, images of a smoky Brooklyn bridge, and baseball caps with sayings including “USS New York, Never Forget.”

King says he doesn’t have a monopoly on grief — but it is what drives him.

“If you ask me what I think of about going to work every day, its 9/11 and preventing another 9/11. There were too many people I knew,” he told CNN in an interview in his office.

That’s why he says he is determined to use his powerful post as House Homeland Security committee chairman to hold a highly controversial hearing on what he has dubbed radicalization of Muslims in the United States.

“I have no choice, I have to hold these hearings, these hearings are absolutely essential,” says King. “There are elements in that community that are being radicalized, and I believe that the leadership, the leaders of that community, do not face up to that reality. Too many cases are not cooperative, not willing to speak out and condemn this type of radicalization that is going on,” he insists.

The fact that he is singling out the Muslim American community has ignited protests and anger against him, and accusations of bigotry. He has even been compared to Sen. Joseph McCarthy, who used a congressional gavel he wielded in the 1950s to go on a Communist witch hunt. King says there is “no basis” for that. “I tell people wait and watch and listen to the hearing and they will see it will be a thoughtful, meaningful very fair hearing,” he says.

King once had a close bond with leaders in the Muslim American community. In the 1990s, he broke with fellow Republicans and backed President Bill Clinton’s military efforts in the Balkans to defend Muslims there.

“That was not popular in my district, but I did it because it was the right thing to do. I thought the Muslim populations in those countries were being victimized,” says King.

Though the Muslim community in his mostly blue-collar Long Island district is small, King had close relationships with Muslim leaders — he even attended a ribbon-cutting at a local mosque.

But King says after 9/11 a switch flipped

“I saw the Muslim-American community not responding the way that they should have, covering up for al Qaeda, when they tried to blame it on Jews or the FBI — I couldn’t believe what I was hearing, these people I had known them for years, I had their relatives interning in my office, I had gone to weddings and dinners of leaders in the Muslim-American community, and the same people that I had known, I hear them saying its not al Qaeda, it’s the FBI, I couldn’t believe it,” recalls King.

One of those leaders was Ghazi Khankan with the Islamic Center of Long Island. “I said we should also investigate the possibility of Israel being involved. That changed his opinion 100%,” says Khankan.

King says he was furious that no Muslim leaders denounced those post-9/11 comments. But even worse, he insists, was what he started hearing from law enforcement — that the Muslim-American community was not cooperating with efforts to rein in radicalization and prevent terror threats.

“That would be psychobabble, to say that because of what was said after 9/11, I’m holding these hearings. That’s when I first began to look more carefully,” he says. “Since then, it’s dealing with police at all levels, in New York and around the country…privately, I am told time and again that they’re not getting the cooperation they need.” he says.