by Ben Wolfgang and Dave Boyer - The Washington Times
September 24, 2015 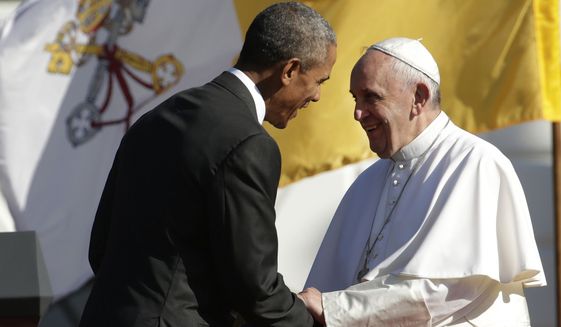 Pope Francis called for American leadership Wednesday in combating climate change, embracing immigrants and caring for the poor, using his unparalleled pulpit to sound solidarity with President Obama on a host of issues — but the pontiff also poked the White House on religious liberty, and insisted pro-life and family causes were at the center of his visit.

In a greeting with Mr. Obama at the White House, and then later in remarks to church leaders at Washington’s Cathedral of St. Matthew the Apostle, the pope alternated seamlessly between praising American political leaders for their action and chiding them to do more on issues of moral conscience.