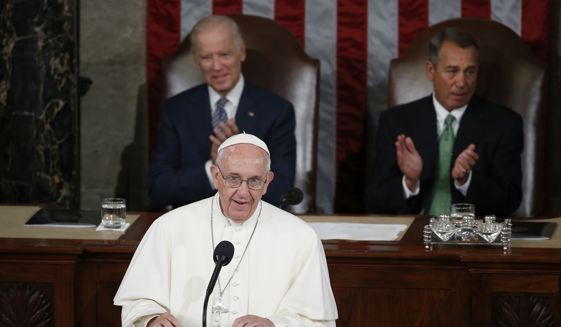 Pope Francis called on Americans to fully embrace the Golden Rule in politics as the head of the world’s 1.2 billion Catholics delivered a sermon on Capitol Hill on Thursday, challenging Congress and voters alike to serve the needy and to see the world in nuance rather than the “simplistic reductionism which sees only good or evil.”

In halting English, dressed in the white pontifical robes and reading from printed text rather than teleprompters that have become ubiquitous for politicians, the pope proclaimed himself a believer in the American dream, but set his sights globally, calling for a halt to the world arms trade and “new global forms of slavery.”