Portman: ‘I think I’ll end up being’ in the Senate 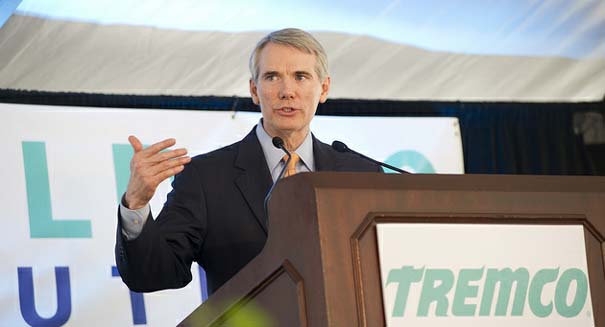 “I just got elected two years ago. I think that’s where I’m going to end up staying,” Portman said when asked his thoughts about possibly leaving the Senate and becoming vice president.

“I think it’s a very important position right now,” Portman continued. The senator reasoned there are pressing issues facing the nation – including the debt, the deficit, developing energy resources and health care issues.

Portman then added: “And right now Congress is paralyzed. And we’re really in kind of a partisan gridlock. We need leadership, and that’s where I intend to stay. I think I can really help in there.”

“That’s where I think I’ll end up being.”

Moments before, the senator used similar words, telling a reporter, “We need Mitt Romney. And I will help him all I can. But I’ll probably stay in the United States Senate.”

It’s unclear if Portman is simply keeping the V.P. guessing game going or providing clues to his future plans. It’s also possible the senator is not sure who Romney will pick as his running mate â€“ a process being well guarded by the candidate’s campaign.

In May, at a Bloomberg View lunch, Portman also seemed to play down his potential as a vice presidential candidate, saying at the time, “I think I’m better suited to stay where I am in the Senate.”

Still, Portman’s comments are sure to fuel the vice presidential speculation. He’s consistently been atop the V.P. list for many political speculators, and is among Romney’s staunchest defenders: attending events on behalf of the former Massachusetts governor and praising Romney in various interviews.

Wednesday was no different. The Ohio Republican held forth at five different Romney campaign events inÂ Colorado. Each time the senator ambled off a Romney campaign bus and excitedly praised the candidate while knocking President Barack Obama.

With the stadium as a backdrop, the senator mocked the president.

“Where are the Greek columns?” he asked at one point, a reference to the decorative pillars that visually framed Obama during his speech at the 2008 convention. He continued by claiming that the hope and change Obama promised then has not materialized.