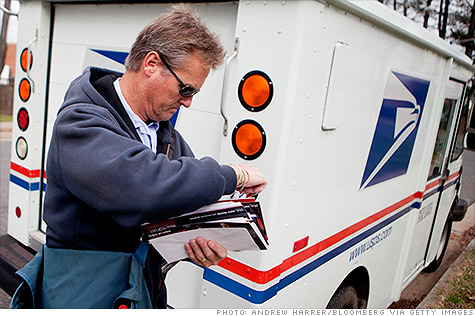 WASHINGTON (CNNMoney) — The 2012 election season couldn’t have come at a better time for the U.S. Postal Service.

While still low on cash, the postal service has enough to avoid insolvency this month, thanks in large part to the mountains of political junk mail and the influx ofÂ Super PACsÂ paying top postage rates.

Federal candidates, political parties and special interest groups are mailing out more fliers and postcards via the postal service in 2012 than in previous election cycles. Spending topped $28.9 million through the end of August, compared to $27.9 million for the entire election cycle in 2008, according to the Center for Responsive Politics.

The postal service is on track to surpass an original estimate of $285 million, which includes the haul from local races nationwide, said Cliff Rucker, vice president of USPS sales.

“Our liquidity situation remains serious,” USPS spokesman David Partenheimer said. “We do expect election mail and theÂ current holidaymailing season to help us get through this month’s low point in our cash flow.”

The USPS has been teetering on the brink of bankruptcy. A key reason was a 2006 law that required the postal service to make annual payments of about $5.5 billion for 10 years to pay for future retiree health benefits.

The other big issue has been the dramatic drop in regular mail that most consumers use because the rise of technology has enabled electronic bill pay and instant communications like email, skype and texting.

In the three months that ended June 30, the agency reportedÂ net losses of $5.2 billion.

Congress has beenÂ grappling with different billsÂ to save the postal service, but no consensus has emerged. None are expected before next year. By spring, the postal service could again faceÂ the threat of insolvency.