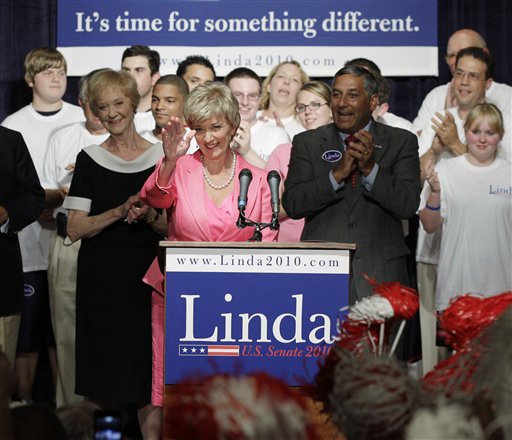 WASHINGTON â€” All hail inexperience â€” the less familiarity with politics the better, no matter the party or state.

“This election is the first time my name has ever been on a ballot,” appointed Sen. Michael Bennet of Colorado said Tuesday night, hours after dispatching his rival in a bitter Democratic primary.

“The support of the voters of Connecticut isn’t bestowed by the establishment or the pundits or the media. It isn’t a birthright,” the former World Wrestling Entertainment executive said after winning the GOP senatorial nomination in her first run for office.

Bennet and McMahon were two of the most distinctive winners on a busy primary night, one an incumbent who proved able to handle the type of primary challenge that has claimed lawmakers elsewhere, the other the epitome of the conservative outsider who will carry the GOP banner into the fall campaign, with control of Congress and 37 governorships at stake.

Each now pivots to the fall campaign. Bennet will face Ken Buck, another self-proclaimed outsider; McMahon is the clear underdog against Richard Blumenthal, the veteran Democratic attorney general of Connecticut.

On a four-state primary night, former Rep. Nathan Deal led ex-Secretary of State Karen Handel narrowly in a Republican gubernatorial runoff in Georgia that was so close it could take days to resolve. The two vied for the right to take on former Democratic Gov. Roy Barnes, who unleashed the first television ad of the fall campaign before the polls had closed.

In Minnesota, former Sen. Mark Dayton narrowly won the Democratic nomination for governor. He will face conservative State Rep. Tom Emmer, the easy winner of the GOP line on the ballot. Democrats have not captured the statehouse in nearly a quarter-century.

Tom Foley, a businessman and former U.S. ambassador to Ireland, won a three-way race for the Republican nomination.

Former Stamford Mayor Dan Malloy defeated businessman Ned Lamont for the Democratic nomination. It was Lamont’s second try for statewide office and far quieter than his first. He won a Senate primary four years ago in one of the standout races of the 2006 campaign, upsetting Sen. Joe Lieberman, who then won a new term in the fall as an independent.

In Colorado, Denver Mayor John Hickenlooper was unopposed for the Democratic gubernatorial nomination.

Republican rivals Dan Maes, a businessman, and former Rep. Scott McInnis were in a close race after a campaign in which each suffered self-inflicted wounds.

McInnis has acknowledged receiving $300,000 as part of a foundation fellowship for a water study report that was partly plagiarized. Maes has paid $17,500 for violating campaign finance laws.

The spectacle prompted former Rep. Tom Tancredo to jump into the race as an independent, which in turn led state party chairman Dick Wadhams to say it would be difficult if not impossible to defeat the Democrat this fall.