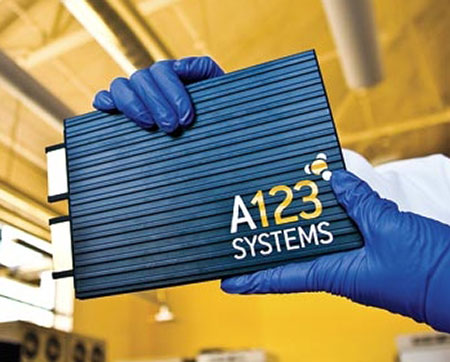 Battery maker A123 Systems vowed thousands of new jobs when it received a nearly quarter-billion-dollar stimulus grant in late 2009, but federal job-tracking figures show only a few hundred positions were created before the company joined a growing list of federally backed energy businesses that ended in bankruptcy.

The latest quarterly report on file with a federal stimulus tracking database shows just seven positions created through the grant from April to June this year. Previous quartersâ€™ job reports contained anywhere from a handful of positions created to more than 100 new jobs.

But even when the quarterly reports are combined, a total of 408 new positions were reported under the stimulus program since 2009, amounting to more than $300,000 spent for each new job reported.
â€œA123 has been struggling for some time. Was the company struggling when the Energy Department decided to award it a federal grant? Did the Energy Department perform enough due diligence before making this award?â€ Republican Sens. Chuck Grassley of Iowa and John Thune of South Dakota said when they recently pressed Energy Department officials to explain the selection process.

The companyâ€™s bankruptcy has spawned renewed scrutiny on the Energy Department after it backed several other businesses now involved in high-profile bankruptcies, including Solyndra LLC, the California-based solar panel manufacturer that went broke after burning through a half-billion dollars in federal money.

Energy Department officials say the job creation numbers are misleading, noting that the jobs verified by The Washington Times through the government database donâ€™t include many other positions that were created but not reported on the federal Recovery.gov tracking website.

â€œRecovery.gov reflects a small portion of the total employees working on our projects â€” serving as a quarterly snapshot of only those workers paid directly with Energy Department funds,â€ department spokeswoman Jen Stutsman wrote in an email.

â€œA123â€™s manufacturing facilities are employing hundreds of workers on site in Michigan â€” plus workers up and down the supply chain â€” building advanced batteries here in the U.S.â€