Reid: Cantor should not be in debt limit talks 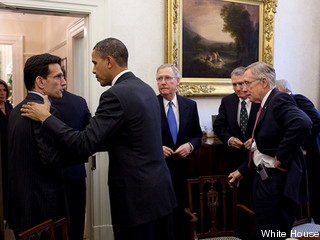 Reid says Cantor’s conduct during the sensitive White House talks have shown, in Reid’s words, “he shouldn’t even be at the table.” Reid says other congressional leaders are negotiating in good faith as an Aug. 2 deadline approaches for raising the debt limit.

That’s when the Obama administration says the government would begin defaulting if no agreement is reached to raise the borrowing limit. Leaders of both parties and the business world have said that a default would be catastrophic.