Rep. Gutierrez arrested outside of White House in immigration protest 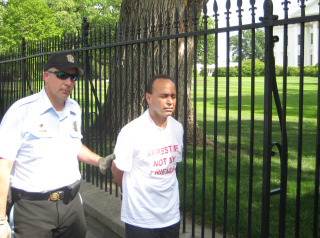 By Kevin Bogardus – The Hill

Rep. Luis Gutierrez (D-Ill.) was arrested outside the White House on Saturday during a May Day protest for immigration reform.

Guiterrez had been speaking to a crowd of hundreds at Lafayette Square when he announced that he was going to go to the White House fence with other protesters, sit down, and not move until he was arrested or until comprehensive immigration reform was signed.

Gutierrez, who chanted “Si se puede” (“Yes, it is possible”) along with other demonstrators, linked arms with other protesters and took a seat along the White House fence. He was warned to move by police, and when he did not comply he was arrested with a few dozen other protesters.

The crowd chanted the congressman’s name as he was led onto the bus.

Gutierrez was wearing a T-shirt that read, “Arrest me, not my friends.”