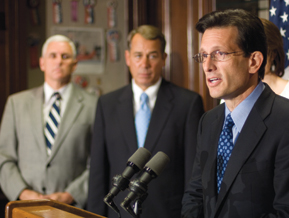 House Republican leaders, facing a crucial budget face-off with the White House and Senate Democrats, are scrambling for ways to avoid a government shutdownâ€”or at least the blame for one.

Fresh from winning House approval Saturday of a landmark spending-cut bill, GOP leaders now are preparing a short-term spending measure to keep the government open for about two additional weeks while broader budget talks are conducted.

Congress is in a winter holiday recess until next Monday, leaving little time to reach a deal before a temporary spending bill expires March 4. Failure to reach agreement by then could force a federal government shutdown.

In exchange for extending the deadline, Republicans want Democrats to agree to cut spending even in that short-term measure, and will try to put the onus on Democrats if they oppose it.

Brad Dayspring, spokesman for House Majority Leader Eric Cantor of Virginia, said the short-term bill would make “smart cuts and savings to keep the government operating.” If Senate Democrats do not go along, he said, they will “put President Obama in an extremely difficultâ€”if not impossibleâ€”position of having to explain why his party is willing to force a shutdown in defense of a status quo government.”

Sen. Charles Schumer of New York, a member of the Democratic leadership, conceded no ground.