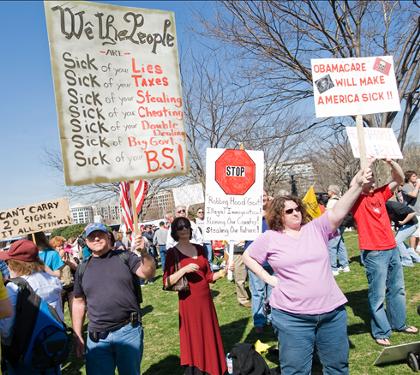 Congressional Republicans rallied Tea Party activists to oppose the health-care legislation on the verge of being approved by Congress even as party leaders began to look beyond Sunday’s vote to campaigning against the reform in the fall elections.

As a group of several hundred protesters on the lawn of the Capitol shouted “No! No! No!” “Nancy, you will burn in hell for this!” and “Kill the bill!” rank-and-file Republican lawmakers came out to the balcony off the House floor in the midst of a series of procedural votes. Two different trios of GOP lawmakers, including Rep. Tom Latham (Iowa) and Rep. Jo Ann Emerson (Mo.), waved signs with the words “Kill” “The” and “Bill” as the crowd cheered.

The crowd booed as Rep. John Carter (R-Tex.) held up his copy of the legislation, which is more than 2,000 pages long, and loudly cheered as Rep. Geoff Davis (R-Ky.) waved a “Don’t Tread on Me” flag.

Two people were arrested in the House gallery Sunday afternoon and charged with disruption of Congress, according to Lt. Raymond Howellof the Capitol police. He said that William Gunn and David Sanders, both ofMassachusetts, had stood up and yelled, “Kill the Bill” and that neither resisted removal from the gallery. Disruption of Congress is a misdemeanor.