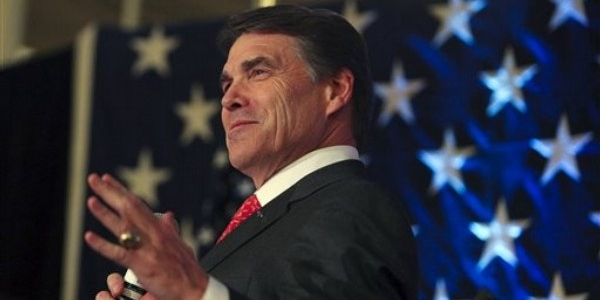 As many grass-roots Republicans remain in search of a conservative candidate with the pizazz to go toe-to-toe against President Obama, a man from deep in the heart of Texas who was tea party before the tea party was cool appears to be giving the presidential race some thought.

Gov. Rick Perry has insisted on multiple occasions that he has no interest in the presidency, but RCP has learned that political associates have begun to nose around quietly on Perry’s behalf.

A Texas pol who is close to Perry has been telling a few key strategists that the nation’s longest-serving governor sees a vacuum and is waiting to be summoned into the race. This source believes that could happen by late summer. Without fellow Southerners Haley Barbour or Mike Huckabee in the race — and with Newt Gingrich’s early troubles raising further doubts about the current lineup — there could be a glaring niche for Perry to fill.

According to another well-connected Republican, at least one Perry confidant has been very quietly making inquiries about the political terrain in the nation’s first voting state of Iowa. A third Perry associate, RCP has learned, has been heralding a small contingent of Iowans with the time-tested line that is often used by would-be candidates who are leaving their options open: “Keep your powder dry.”

Perry’s aides have long made it clear that the tough-talking Texan, who succeeded George W. Bush in Austin in 2000, would not seriously entertain the idea of mounting a White House run before the state’s legislative session finishes at the end of this month. That date is now less than two weeks away, and the 2012 presidential field remains fluid.

The Perry chatter has been so discreet that nearly a dozen early-state GOP operatives and consultants contacted by RCP hadn’t heard a word about it. But they are unfazed that the buzz exists.

Mark McKinnon, a Republican strategist and Bush administration veteran, said, “I’m not aware of Perry making calls, although it wouldn’t surprise me.”

Perry would hardly be the first prominent Republican to raise presidential expectations, however unobtrusively, only to later back away — and his associates remain adamant, in public at least, that nothing has changed.