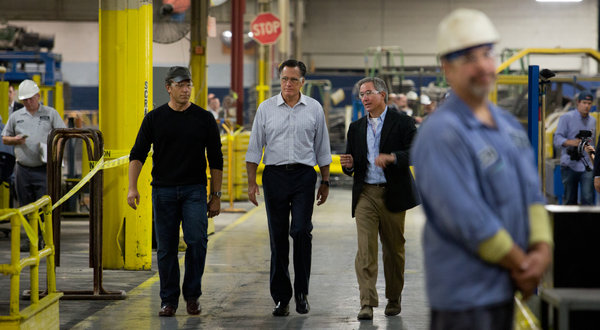 WESTERVILLE, Ohio â€”Â Mitt RomneyÂ stepped up his efforts to repair the damage from his â€œ47 percentâ€ comments, releasing a new television ad on Wednesday in which he speaks directly to the camera about his compassion and tries to reassure voters that he cares about the poor and middle class.

The 60-second ad,Â â€œToo Many Americans,â€Â was Mr. Romneyâ€™s most aggressive effort to clean up the fallout from his secretly videotaped remarks at a May fund-raiser, where he called voters who do not pay income tax â€œvictimsâ€ who are dependent on the government and feel â€œentitled to health care, to food, to housing, to you name it.â€

But the ad came nine days after the video surfaced, a period in which Democrats have bashed Mr. Romney over the remarks, leaving him on the defensive in swing states like Ohio. The ad reflected a belief among his aides that in addition to trying to move past his â€œ47 percentâ€ comments, Mr. Romney can appeal to voters in an intimate, personal way, bonding over their economic worries. The spot, in which Mr. Romney seems to address the viewer, is an attempt, aides said, to reveal the compassion behind the policy. â€œThe goal is to connect with voters over their anxieties over the state of the economy, and reflect the fact that Governor Romney has a plan to fix it,â€ said Kevin Madden, a senior campaign adviser.

On Wednesday, the Romney campaign reserved $3.4 million worth of advertising time in eight swing states. Nearly half of that â€” more than $1.5 million â€” was for Virginia. The rest was spread across Colorado, Florida, Iowa, Nevada, New Hampshire, North Carolina and Wisconsin. His total ad spending for the week is more than $10 million.

But the campaignâ€™s slow response also highlighted the gamble Mr. Romney is taking: a belief that the race will be decided in its closing weeks, and that much of the battering he has taken fromPresident ObamaÂ and the Democrats will not have a permanent effect.

The ad comes on the heels of a concerted effort by the campaign to offer more of Mr. Romneyâ€™s personal story, after Republican complaints that he has not done enough to sell or humanize himself to voters. â€œPresident Obama and I both care about poor and middle-class families,â€ Mr. Romney says in the ad. â€œThe difference is my policies will make things better for them.â€

The Obama campaign continued to demand specifics in an effort to link Mr. Romneyâ€™s â€œ47 percentâ€ remarks to the policies he would pursue as president. â€œMitt Romneyâ€™s new ad is just more of the evasiveness that his campaign has become known for,â€ said Lis Smith, an Obama campaign spokeswoman. â€œHe pays lip service to working Americans, but doesnâ€™t name a single policy to strengthen the middle class.â€

The Democratic National Committee also releasedÂ a Web videoÂ that mashed the new Romney ad with his gaffes, including the 47 percent comment.