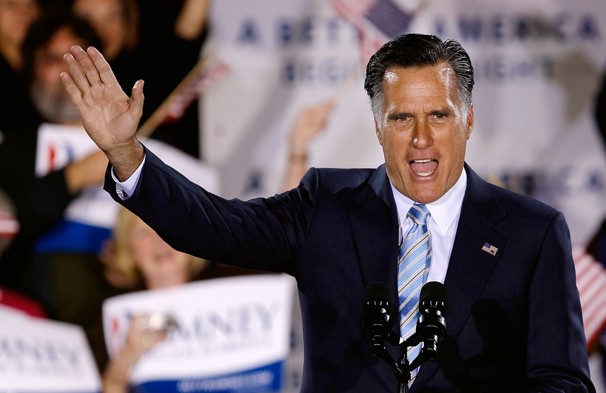 Appearing via video at the Faith and Freedom Coalitionâ€™s annual meeting Saturday morning, former Massachusetts governor Mitt Romney (R) delivered a speech that hinged on social issues but also focused in on what remains the top issue in the presidential election â€” the economy.

â€œIf people want a president that will give the middle class of America a fair shot, theyâ€™ll vote for me, and I hope you do,â€ Romney, dressed in a suit and standing in front of his campaign bus in Pennsylvania, told the several hundred social conservatives gathered in Washington for the summit.

In his prepared remarks, Romney spoke of â€œanchors,â€ which he said include family and the Constitution.

â€œAll these things impinge upon our freedoms. .â€‰.â€‰. I think America is stronger when weâ€™re lashed firmly to the anchors that keep us steady,â€ he said.

At times, he struck a note that bore similarities to the message former senator Rick Santorum (R-Pa.) delivered on the campaign trail.

He told the crowd that his message to young people is to â€œget married before they have children, because the opportunity for a mom and a dad to help guide the life of a child gives them such an enormous advantage.â€

And he noted a 2009 Brookings study that Santorum has been fond of citing. The study, Romney said, shows that if Americans graduate from high school, work and get married before having children, their chance of becoming impoverished is dramatically reduced.