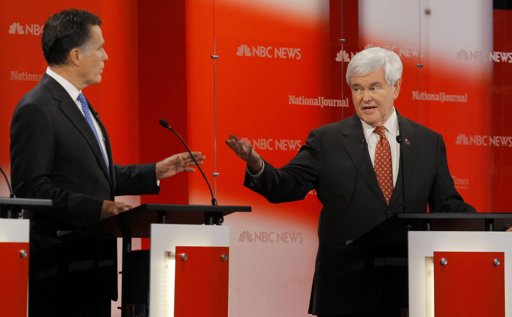 TAMPA, Fla.â€”A newly aggressive Mitt Romney charged in campaign debate Monday night that Newt Gingrich “resigned in disgrace” from Congress after four years as speaker and then spent the next 15 years “working as an influence peddler” in Washington.

Gingrich shot back that Romney’s attacks were riddled with falsehoods, and he referred to statements by two men who ran against Romney in 2008 in contending the former Massachusetts governor “can’t tell the truth.”

The clash occurred in the opening moments of the first of this week’s two debates before the Jan. 31 Florida primary.

Gingrich trounced Romney in last Saturday’s South Carolina contest, an upset that reset the race to pick a rival to President Barack Obama in the fall.

Asked if he could envision a path to the nomination for himself, Santorum said the race has so far been defined by its unpredictability. He conceded he had been defeated for re-election in 2006 in Pennsylvania but said the party lost the governorship by an even bigger margin than his own defeat.

“There’s one thing worse than losing an election and that’s not standing for the principles that you hold,” he said, a comment he frequently makes while campaigning in an attempt to question Romney’s commitment to conservatism.

Paul sidestepped when moderator Brian Williams of NBC asked if he would run as a third-party candidate in the fall if he doesn’t win the nomination. “I have no intention,” he said, but he didn’t slam the door.

The polls post-South Carolina show Gingrich and Romney leading in the Florida primary. That and the former speaker’s weekend victory explained why the two were squabbling even before the debate began.

Romney began airing a harshly critical new campaign ad and said the former House speaker had engaged in “potentially wrongful activity” with the consulting work he did after leaving Congress in the late 1990s.

Gingrich retorted that Romney was a candidate who was campaigning on openness yet “has released none of his business records.”

He followed up two hours before the debate by arranging the release of a contract his former consulting firm had with the Federal Home Loan Mortgage Corp. for a retainer of $25,000 per month in 2006, or a total for the year of $300,000. The agreement called for “consulting and related services.”

Despite Romney’s attempts to call Gingrich a lobbyist, the contract makes no mention of lobbying.