Romney, Opening Race, Presents Himself as the Candidate to Face Obama 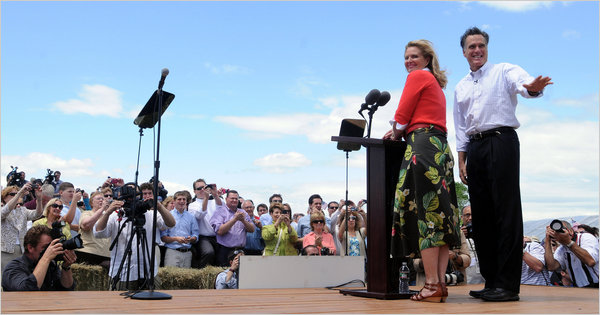 STRATHAM, N.H. â€” Formally offering himself as a candidate for the presidency for a second time,Â Mitt Romney sought Thursday to look past the primary challenges of the next 12 months, portraying the choice for voters as one between himself and President Obama.

In a 25-minute speech at the windswept Bittersweet Farm in New Hampshire, Mr. Romney, the former governor of Massachusetts, made no mention of his potential Republican rivals, focusing instead on what he called Mr. Obamaâ€™s failed economic policies. He blamed the president for high unemployment, rising gasoline prices, falling home values and a soaringnational debt.

â€œBarack Obama has failed America,â€ Mr. Romney declared. â€œIn the campaign to come, the American ideals of economic freedom and opportunity need a clear and unapologetic defense, and I intend to make it â€” because I have lived it.â€

By Republican tradition, it should be Mr. Romneyâ€™s turn as the nominee. The party has a long history of picking a politician who has paid his dues on the campaign trail â€” losing, learning lessons and then running again. Mr. Romneyâ€™s speech on Thursday sounded like one he might eventually give at the partyâ€™s national convention next year.

With 17 months to go, Mr. Romney has emerged as the front-runner for the nomination after reassembling a powerful fund-raising apparatus and an extensive campaign operation.

But Mr. Romneyâ€™s potential Republican challengers have no intention of letting him anoint himself the partyâ€™s nominee. That fact that was made starkly clear on Thursday by sharp-edged comments from Sarah Palin and Rudolph W. Giuliani â€” both of whom are still mulling presidential runs â€” even as Mr. Romney was making his candidacy official.

Ms. Palin, the former governor of Alaska, criticized Mr. Romneyâ€™s Massachusetts health care plan as her One Nation bus tour headed toward the coastal town of Portsmouth, N.H., for a clambake on Thursday evening.

â€œIn my opinion, any mandate coming from government is not a good thing,â€ Ms. Palin told reporters in Boston, taking aim at Mr. Romneyâ€™s past support for a requirement that individuals in Massachusetts buy health insurance.

Ms. Palinâ€™s remarks â€” and even her presence in the state â€” were clearly intended to tweak Mr. Romney on his big day. Ms. Palin has said her bus tour is not meant to be political. But she arrived in New Hampshire a day earlier than expected and made her comments in time to be included in all of the stories about Mr. Romneyâ€™s speech.