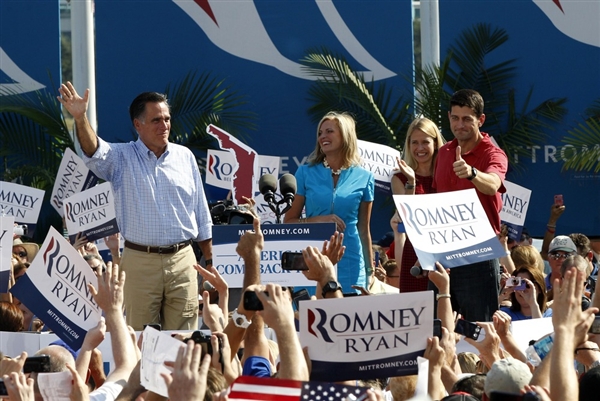 JACKSONVILLE, Fla. â€“Â Mitt RomneyÂ andÂ Paul RyanÂ went to military country Saturday and promised those serving our country that if elected, they would not cut the military budget.

“Now thereâ€™s only one place — thereâ€™s only one place this presidentâ€™s willing to cut, and not just a little.Â  He wants to cut a trillion dollars out of our military budget,” Romney told the crowd to boos. “Look, thatâ€™s bad for jobs and itâ€™s bad for our national security.Â The world is not a safer place right now, not with Iran trying to become nuclear, dangers throughout the world.Â  If Iâ€™m president and Paul Ryanâ€™s vice president we will not cut our military budget.”

While Ryan, chairman of the House Budget Committee, continues to campaign against these pending defense cuts, he in fact voted last summer for the Budget Control Act of 2011, resolving the debt-ceiling debate, that included this defense sequester.

Romney and Ryan spoke here in Jacksonville, which has the third-largest naval presence in the country.

“I look around here and I see veterans, I see Air Force, I see Marines, I see Army over there, I see a lot of Navy,” Ryan said before the roughly 5,000-person crowd. “Thank you for your service to our country. You make us proud.”

The GOP ticket has been trying to reach out to different pockets of the electorate in the past week to try bridging the gap for Romney as he trails PresidentÂ Barack ObamaÂ in polls. The GOP nomineeâ€™s wife,Â Ann Romney, held events geared toward both women and Hispanics. Mitt Romney traveled to Indianapolis on Wednesday to address veterans at The American Legion.