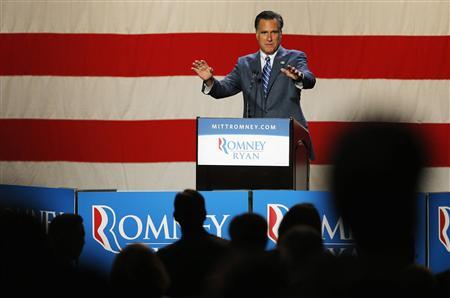 (Reuters) – Republican presidential candidate Mitt Romney vowed on Sunday that he would campaign more aggressively in the remaining weeks before the November election.

The comments, made to reporters aboard his campaign plane, suggested Romney was taking to heart criticism from his own party about the amount of time he has spent raising funds versus speaking to voters.

“I think the fundraising season is probably getting a bit quieter. I would rather spend the time in key states,” Romney said in his first comments to reporters since Monday.

Romney is about to kick off a week of campaigning in battleground states, starting with Colorado and Ohio.

He said Democratic President Barack Obama’s campaign consistently mischaracterizes his positions on issues like taxes and abortion, and voters would get a better chance to learn about his positions during debates that begin on Oct 3.

Heavy advertising by Obama has coincided with a slow but noticeable decline in Romney’s standing in opinion polls.

Although he is neck-and-neck with Obama in national tracking surveys, polls in specific battleground states like Ohio and Colorado, where advertising has been nonstop, show Obama with a slightly wider lead.

Sunday night’s event in Denver kicks off a busier week for Romney, who spent much of Friday and Saturday raising money in Nevada and California.

Romney will visit Pueblo, Colorado, on Monday and head to Ohio Tuesday after a brief visit to New York to speak at the Clinton Global Initiative.

His comments on the plane echoed a vow made in an interview broadcast Sunday on the CBS show “60 Minutes.”

“I have to go across the country, particularly in the states that are closest and describe how it is I’m going to get the economy going, and how we’re going to restore the economic freedom that built this economy in the first place,” Romney said.

He defended his campaign as “very effective.” Most of his top aides were in Los Angeles Saturday and Sunday for meetings thought to include debate preparation.

Still, many top Republicans are clamoring for a change in schedule and in tone for Romney.

“I want to see fire in the belly,” Wisconsin Governor Scott Walker said of Romney on “Fox News Sunday.” He also said he wants the former Massachusetts governor to be “lit up and ready to go.”

“You’ve got to get off the heels and get out and charge forward,” Walker said.