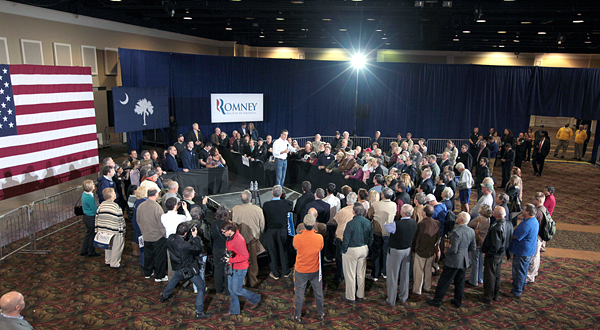 Under growing pressure from rival Republicans,Â Mitt RomneyÂ said on Tuesday that he paid a tax rate approaching 15 percent on his millions of dollars in annual income but said he would not make public his full return until April.

His effective tax rate was â€œprobably closer to the 15 percent rate than anything,â€ Mr. Romney said at a campaign stop in South Carolina, noting that most of his considerable income over the last decade has come from investments rather than from earned income like salary. He also characterized as â€œnot very muchâ€ the $374,327 he reported earning in speaking fees last year, though that sum would, by itself, very nearly catapult most American families into the top 1 percent of the countryâ€™s earners.

Mr. Romney mentioned the 15 percent figure in response to a question at a news conference, leaving uncertain whether his comment was unplanned or a deliberate effort to begin airing the issue ahead of a general election campaign. But his remarks on Tuesday drew immediate criticism from the Obama administration and Republican rivals, and are likely to cement Mr. Romneyâ€™s place as an unwilling emblem of the intensifying national debate over taxation andÂ income inequality, which burst into the campaign this month when rival candidates began attacking Mr. Romneyâ€™s career in the leveraged buyout business.

Mr. Romneyâ€™s admission left unclear â€” and his campaign declined to clarify â€” whether the 15 percent he was referring to represented his overall tax burden or simply his federal income taxes. That makes it hard to compare the figure with the tax burdens of a typical middle-class American â€” or of Mr. Romneyâ€™s opponents. President Obama reported paying an effective federal tax rate of 26 percent on his 2010 family income.

But in acknowledging that most of his income comes from investments, Mr. Romney underscored a fact likely to figure prominently in attacks from Mr. Obama and other Democrats in the coming months: He is among the small percentage of very wealthy Americans who have benefited enormously from shifts in federal tax policy that have pushed federal tax rates on investment income well below the top 35 percent rate for wages and salaries, which constitute most earnings for the vast majority of people.

â€œThe low taxes on capital gains and dividends are why people who make a ton of money, which is largely from investment income, do awfully well,â€ said Robert McIntyre, the director of Citizens for Tax Justice, which advocates for more progressive taxation. â€œThe Warren Buffetts, the hedge fund managers â€” they pay really low tax rates.â€

Indeed, Mr. Romney probably pays a lower overall rate than many other wealthy Americans. They typically take home more ordinary income from salaries and wages than does Mr. Romney, who left Bain Capital in 1999 and joked to a group of voters last year that he was â€œunemployed.â€

Like other people who amass great wealth at hedge funds orÂ private equityÂ firms, Mr. Romney earned much of his money at Bain in the form of â€œcarried interest,â€ a share of the profits earned by investors in Bain funds, which current federal rules treat as long-term capital gains taxed at a 15 percent rate. A significant portion of his familyâ€™s wealth remains locked up in Bain funds, from which the Romneys draw income on their own investments with the firm, as well as a share of Bainâ€™s profits. The Romneys also derive significant income from other investments andÂ mutual funds.

During 2010 and the first nine months of 2011, the Romney family had at least $9.6 million in income, according to a financial disclosure filed in August, and possibly much more.

Democrats have been calling on Mr. Romney to release his tax returns since early December. But it was criticism in recent days from fellow Republican presidential candidates, including Newt Gingrich and Gov. Rick Perry of Texas, that seemed to jar Mr. Romney, who during Monday nightâ€™s debate suggested he would be open to releasing his returns in April without promising to do so.

That answer provoked a fresh attack from Mr. Gingrich on Tuesday morning, when he suggested that Mr. Romney might be hiding something from voters in South Carolina.

â€œIf youâ€™re a South Carolinian, you say, â€˜Wait a second, why donâ€™t you want me to know about it? Why are you going to wait until after Iâ€™ve voted?â€™Â â€ Mr. Gingrich said during a television interview on Tuesday.

Democrats, meanwhile, redoubled their attacks on Mr. Romney as out of touch with the economic concerns of the middle class.