Romney tells voters to move on from Obama disappointment 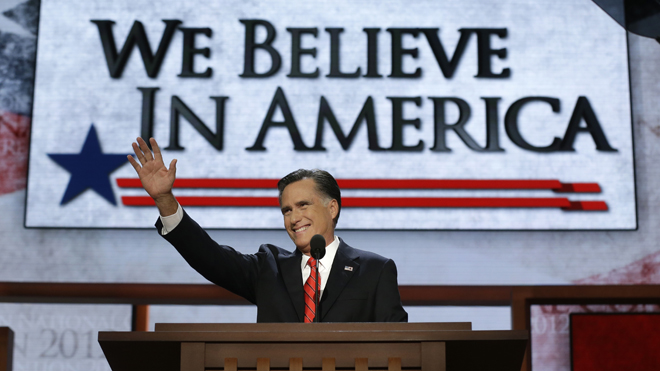 By John Whitesides and Steve Holland

(Reuters) – Mitt Romney urged voters to leave behind their disappointment in President Barack Obama and help him restore the promise of America, in a high-stakes convention speech on Thursday in front of the nation.

Taking center stage to accept the Republican presidential nomination, Romney will pledge to rebuild the U.S. economy and create millions of jobs after Obama’s 2008 election promises “gave way to disappointment and division.”

Often accused of being cold and formal, Romney is focusing his campaign argument on the need to jump-start the economy but the Republican convention in Tampa, Florida, heard from friends and relatives who painted a picture of a humane, compassionate man.

Emotional testimonials about Romney’s work as a Mormon leader made convention delegates in the Tampa Bay Times Forum cry. One couple talked of how Romney befriended and comforted their dying teenage son. A woman, Pam Finlayson, recalled how he prayed with her in hospital when her premature baby daughter was close to death.

Romney’s acceptance speech, which launches a two-month dash to the November 6 election, will be seen later Thursday by a television audience in the tens of millions and give some voters their first extended look at the former Massachusetts governor.

It could be a defining moment for Romney, who has struggled to win over conservatives and connect with independent voters in a campaign against Obama that has been dominated by the sluggish economy and lingering high unemployment.

“What is needed in our country today is not complicated or profound. It doesn’t take a special government commission to tell us what America needs. What America needs is jobs. Lots of jobs,” Romney will say, according to excerpts of his speech released by the campaign.

Romney, who says his experience as a business executive is the cure for the ailing economy, drew a sharp comparison between the promise of Obama’s election in 2008 and the results of the last four years.

“Today the time has come for us to put the disappointments of the last four years behind us, to put aside the divisiveness and the recriminations,” he said. “Now is the time to restore the promise of America.”

Democrats alternately portray Romney, 65, as a heartless corporate raider, wealthy elitist, tax evader and policy flip-flopper who should not be trusted with the keys to the White House.

To counter that image, Romney’s speech included biographical passages describing his parents and family and defending his work at Bain Capital, the private equity company that critics have accused of raiding companies and cutting jobs.

Gingrich: Time to commit to Reagan tradition and ‘come together’