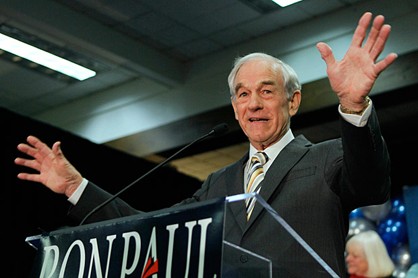 Texas Republican congressman Ron Paul pointedly refused to endorse his partyâ€™s presidential contender, Mitt Romney, arguing that neither he nor President Barack Obama would make necessary cuts to public spending that would avert a fiscal catastrophe.

â€œNo,â€ the iconoclastic Libertarian bluntly told CNBCâ€™s â€œFutures Now,â€ when asked about whether he was prepared to endorse Romney. He accused both the former Massachusetts governor and the president of being captive to similar interests.

â€œBoth within the establishment where they need the Federal Reserve as lender of last resort to make sure that you take all the risk in the world,â€ Paul said. He linked the Fed â€” his favorite foil â€” and the Washington political establishment together as part of a â€œone party systemâ€ that refuses to make necessary but difficult choices to cut spending. (Read more: Ron Paul Vows to Continue Campaign Against Status Quo.)

He cast some doubt that the looming fiscal cliff would have the economic impact many market observers are warning about, adding that Congress and the White House would likely find a way to delay the inevitable cuts in spending and tax hikes.