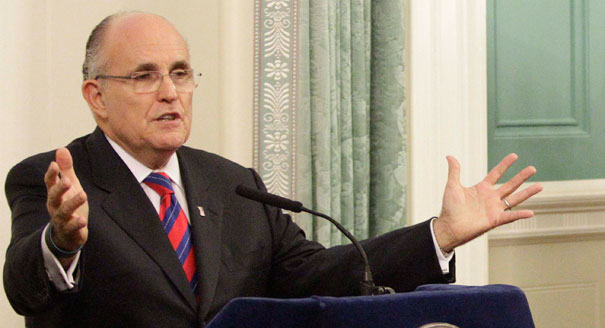 The survey shows Giuliani getting 16 percent of independents and Republicans, with nominal frontrunnerÂ Mitt Romney a point behind at 15 percent.

Neither Palin nor Giuliani are sure things for theÂ 2012 election, and their perches in the new poll â€” the first taken by the news organization since Mike Huckabee, Mitch Daniels and Donald Trump bowed out â€” speak to how wide-open the race is.

Palin, the former Alaska governor and Republican vice presidential nominee, has increasingly sent signals that she might jump in, and is launching a bus tour on Sunday that will take her to New Hampshire for the first time since the 2008 race.

“Giuliani has the top spot in a 12-candidate field, but he doesn’t generate a lot of enthusiasm. Only about a quarter of Republicans nationwide said that they would be enthusiastic if Giuliani won the nomination,” said CNN Polling Director Keating Holland. “But he’s not alone â€” only a quarter would be enthusiastic if Palin got the party’s nod, and only one in five would feel the same way if Romney became the GOP’s standard bearer in 2012.”

Giuliani, who has not closed the door to another run in 2012, is headed to New Hampshire for events next week.

Giuliani was the 2008 front-runner in nearly every poll in the lead-up to the Iowa caucuses. But his strategy to primarily bypass the early states and stake his hopes on winning the delegate-rich Florida primary failed. He came in third in Florida, after coming in fourth in New Hampshire, and then quickly endorsed ultimate nominee John McCain.

He has not put in place any real pieces for a second run, although he has repeatedly said he’s considering it. While Palin has done almost nothing either, she has a devoted following and a proven fundraising ability.