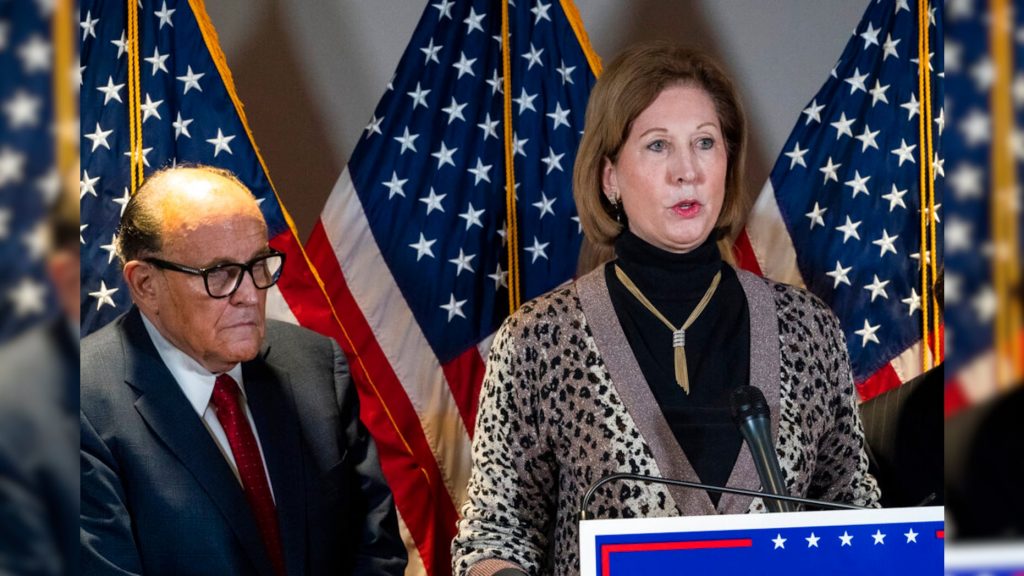 President Trump’s campaign on Sunday distanced itself from Sidney Powell, saying that the lawyer who has been alleging voter fraud in the November election is “not a member of the Trump Legal Team.”

“Sidney Powell is practicing law on her own,” said Trump’s personal attorney Rudy Giuliani and another lawyer for Trump, Jenna Ellis, in a statement. “She is not a member of the Trump Legal Team. She is also not a lawyer for the President in his personal capacity.”

No further details or clarification was offered.

In a statement obtained by the Wall Street Journal, Powell said: “I agree with the statement today. I will represent #WeThePeople and seek the Truth. I intend to expose all the fraud and let the chips fall where they may. We will not allow the foundations of this great Republic to be destroyed by abject fraud.”

The statement comes after Powell – who also serves as Gen. Mike Flynn’s lawyer – has given multiple press conferences on behalf of Trump, who included her in a list of lawyers for his team in a Nov. 14 tweet.

“I look forward to Mayor Giuliani spearheading the legal effort to defund OUR RIGHT to FREE and FAIR ELECTIONS! Rudy Giuliani, Joseph diGenova, Victoria Toensing, Sidney Powell, and Jenna Ellis, a truly great team, added to our other wonderful lawyers and representatives!” the president tweeted.

Powell appeared alongside Giuliani at a whirlwind press conference on Thursday where they both made a number of allegations concerning coordinated voter fraud in a number of states.

Later that night, Fox News’ Tucker Carlson hounded Powell for not providing any evidence to support her claims “despite a lot of polite requests.”

“When we kept pressing, she got angry and told us to stop contacting her,” Carlson said on his program ‘Tucker Carlson Tonight.’ “When we checked with others around the Trump campaign, people in positions of authority, they also told us Powell had never given them any evidence to prove anything she claimed at the press conference.”

In a Saturday-night interview with Newsmax, Powell appeared to accuse Georgia’s Republican governor, Brian Kemp, and its Republican secretary of state of being part of a conspiracy involving a voting-system contract award that she contends harmed Trump’s reelection bid.

“Georgia’s probably going to be the first state I’m going to blow up and Mr. Kemp and the secretary of state need to go with it,” she said, later adding that a lawsuit she planned to file against the state would be “biblical.”

The status of that lawsuit was unclear Sunday night.

Since then, a federal judge rejected her claims of prosecutorial misconduct and has responded quizzically to some of her arguments, including her suggestion at a hearing several weeks ago that her conversations with Trump about the Flynn case were privileged.

She has supported a Justice Department motion to dismiss the prosecution, a request that remains pending before U.S. District Judge Emmet Sullivan.