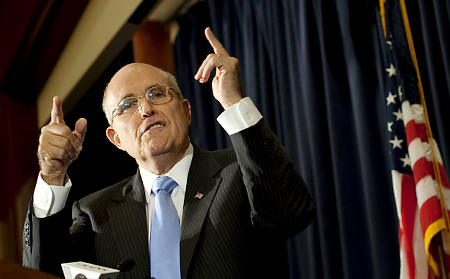 MANCHESTER, N.H. â€” “I find it really hard to say this, because I feel bad about this,” Rudy Giuliani told a banquet hall of 100 Republicans in New Hampshire on Friday night. “This president has been a failure in just about every single thing he’s done. He has ruined our economy. He is ruining our health care.”

It was a brief moment of forced gravity during an otherwise rollicking speech at the Manchester Republican Committee’s annual Lincoln-Reagan Dinner, in which the former mayor attacked President Obama for a host of foreign and domestic missteps, and implicitly undercut some of his potential opponents in a 2012 primary.

“Over the last week and a half, I’ve never witnessed a worse case of presidential decision-making,” Giuliani said of the president’s treatment of Libya. “Or lack of decision-making. Or conduct of foreign policy. Ever. And I worked for two presidents. And met probably the last five or six.”

He tweaked the president for following France’s lead in pushing for a no-fly zone, and accused him of being “afraid” and “timid” when dealing with China.

He made fun of the French military, joked that perhaps Obama thought he was dealing with Long Island and that Muammar Gaddafi was Italianâ€”since it “ends in a vowel”â€”cracked jokes about wind and solar power, and concluded by saying that even Hillary Clinton would have been better than President Obama.

Giuliani also criticized the current Republican front-runner, Mitt Romney, for the health care plan that he passed in Massachusetts. Giuliani said he knew the plan would cost much more than the estimates because he “ran a health care system” in New York, and the cost estimates were never correct.