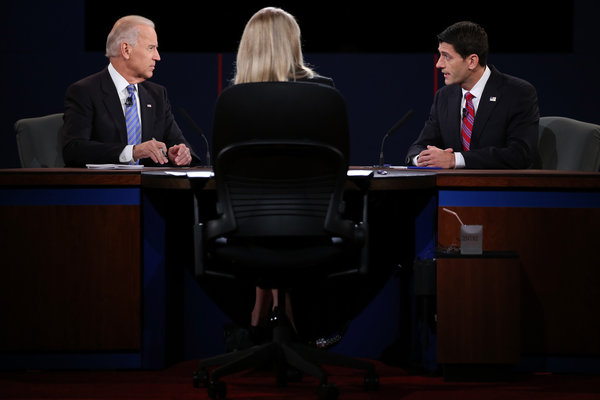 Vice PresidentÂ Joe BidenÂ and Rep.Â Paul D. RyanÂ of Wisconsin tangled over the Middle East, the economy, taxes and more in a scrappy back-and-forth Thursday night at their only debate.

It was a remarkably lively exchange of scoffing, eye-rolling, smirking and mocking chuckles as the vice presidential rivals argued at a table in the 90-minute faceoff at Centre College in Danville, Ky.

A spat over income taxes captured the tone, toggling between combative and jocular. Ryan sought to explain how Republican presidential nomineeÂ Mitt RomneyÂ would cut tax rates across the board by 20%, but make up for the lost revenue by getting rid of loopholes and deductions.

â€œWe want to work with Congress on how best to achieve this,â€ Ryan resumed.

Moderator Martha Raddatz ofÂ ABCÂ News asked the Wisconsin congressman whether he could â€œguarantee this math will add up.â€

Not so, Biden stated. Romneyâ€™s plan, according to the Democratic vice president, would inevitably require pain for the middle class, such as the loss of tax breaks on mortgage interest and college tuition.

So it went for the full hour and a half as Biden and Ryan fought at a steady rat-a-tat pace over almost every topic raised.

It started right at the top when Raddatz, a veteran foreign correspondent, asked Biden whether there had been a â€œmassive intelligence failureâ€ in the fatal assault last month on the U.S. diplomatic compound inÂ Benghazi.

â€œWhatever mistakes were made will not be made again,â€ Biden said of the attack in Libya before pivoting to criticizing Romney on a gamut of national security matters.

Biden creditedÂ President ObamaÂ for ending theÂ Iraq war, saying Romney thought â€œwe should have left 30,000 troops there.â€ He faulted Romney for objecting early on to Obamaâ€™s setting a 2014 deadline for withdrawing U.S. troops from Afghanistan, and for saying he â€œwouldnâ€™t move heaven and earthâ€ to capture Osama bin Laden.