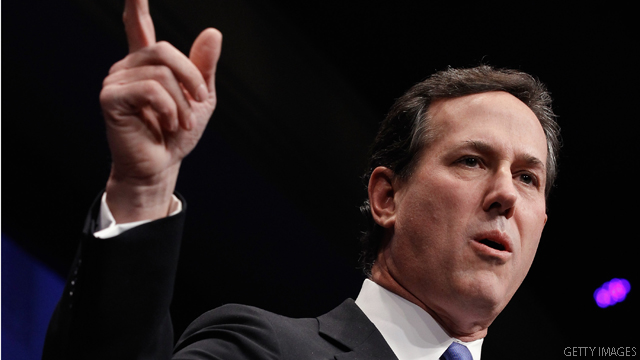 Rick Santorum suggested the Republican presidential primary would soon become a two-man race where he will measure up well to front-runner Mitt Romney.

â€œHopefully after this Tuesday, this will be a two-person race, and we can get down to business of deciding whether we want a conservative or a moderate to go up against Barack Obama,â€ Santorum said in an interview on Bloomberg Televisionâ€™s â€œPolitical Capital with Al Huntâ€ airing this weekend.

Santorum, 53, said he expects to win tomorrowâ€™s Kansas caucuses and finish first or second in the March 13 primaries in Alabama and Mississippi, which would set up a head-to-head race against Romney.

Though he shied away from directly calling on rival Newt Gingrich to drop out of the race, Santorum cited the former U.S. House speakerâ€™s defeats in recent primaries as a sign that his opponent is losing momentum in the race.

Gingrich, who won two primaries — in South Carolina on Jan. 21 and in his home state of Georgia on March 6 — has â€œfinished third or fourth everywhere else, which has been a consistent pattern,â€ said Santorum. â€œSo we feel pretty good that itâ€™s now narrowing to a two-person race.â€

Top Santorum advisers have called for Gingrich to exit the race and let the former Pennsylvania senator consolidate the support of anti-Romney voters.