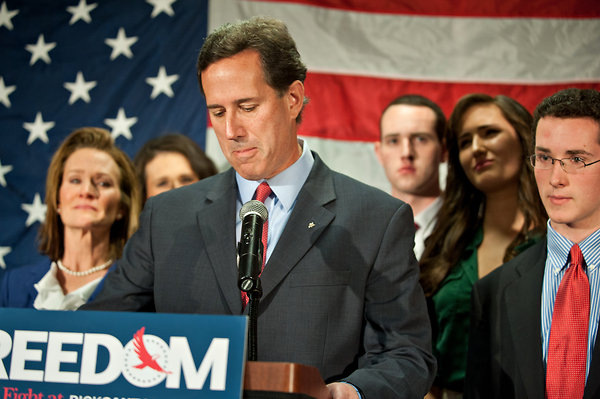 GETTYSBURG, Pa. â€”Â Rick Santorum, with an abrupt decision to end his campaign Tuesday, cleared the way forÂ Mitt RomneyÂ to claim the Republican nomination while dashing the hopes of social conservatives who had propelled Mr. Santorumâ€™s surprisingly successful challenge to the Republican establishment.

Mr. Santorum, a former senator from Pennsylvania, was trailing Mr. Romney in delegates and had little hope of catching up to him, but his strong performance in a brutal nominating contest established him as a force that the party will probably have to reckon with this presidential election year and beyond.

His departure from the race created an anticlimactic moment in the long presidential primary season for Mr. Romney, who has been actively seeking his partyâ€™s nomination for five years and found his conservative credentials constantly in question by the durability of Mr. Santorumâ€™s candidacy. The move springs Mr. Romney from a political limbo in which he was acting like the nominee even though he faced the prospect of weeks of hard â€” and expensive â€” campaigning against Mr. Santorum.

In a hastily called 12-minute speech in a small hotel meeting room here, with his wife, Karen, and four of their seven children at their side, Mr. Santorum said his campaign was over but made it clear that any retreat from the political stage would be only temporary.

â€œWe made a decision over the weekend that while this presidential race for us is over, for me, and we will suspend our campaign today, we are not done fighting,â€ Mr. Santorum said as tears welled in the reddened eyes of his wife and the aides and friends who ringed the room. He did not mention Mr. Romney.

â€œThis game is a long, long, long way from over,â€ he added. He could have been referring to the fall election or to his own future as a voice for the conservative base of his party and perhaps as a future candidate for president. In one immediate sign of his continuing involvement, he kept a speaking engagement in Lancaster, Pa., on Tuesday night with James C. Dobson and other evangelical supporters.

Mr. Romney, appearing in Wilmington, Del., praised his former rival for having made â€œan important contribution to the political process.â€