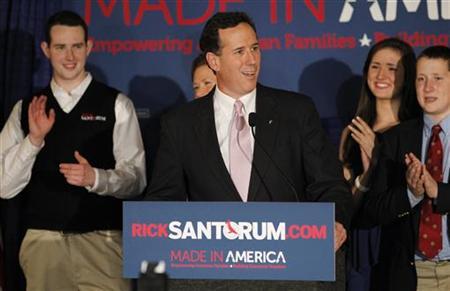 Television networks projected Santorum would narrowly defeat Gingrich and Mitt Romney in tight three-way battles that shook up a volatile Republican presidential race that has already seen a series of shifts and stumbles.

The losses were a severe blow to Gingrich, who represented Georgia in Congress and desperately needed a win in one of the Deep South states to validate his southern-based comeback strategy and keep his struggling campaign afloat.

Pressure will now mount on Gingrich, a former House of Representatives speaker, to drop out so Santorum can consolidate conservatives in challenging front-runner Romney.

“We did it again,” Santorum, who was heavily outspent by Romney in the two states, told supporters at a victory rally in Lafayette, Louisiana, the next southern state with a primary, on March 24.

“We will compete everywhere,” said Santorum, a former Pennsylvania senator. “The time is now for conservatives to pull together. If we nominate a conservative we will beat Barack Obama.”