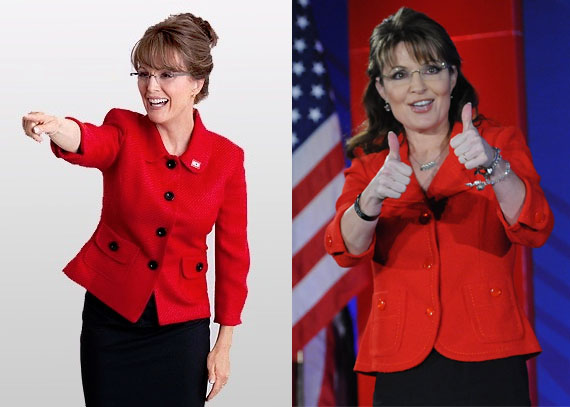 By THE DEADLINE TEAM | The Deadline

At todayâ€™s TCA panel on HBOâ€™s movie Game Change, director/executive producer Jay Roach said he tried to get Sarah Palinâ€™s cooperation for the film about the 2008 presidential election, which is based on the book by Mark Halperin and John Heilemann. â€œOn behalf of the (film), I wrote a long letter explaining that I thought it would â€‘â€‘ we would just do better at getting the story right if she would talk to us,â€ said Roach, also the director of HBOâ€™s Recount, about the 2000 presidential race. â€œAnd I got a very quick email back from her attorney saying, â€˜I checked. She declines.â€™ So I took that as, you know, the final answer.â€ Still, Game Change writer Danny Strong (who also penned Recount) said he was able to interview 25 people connected with the 2008 campaign. He did not get John McCain or his speechwriter Mark Salter but said, â€œI got everybody else, including people who are not portrayed in the film.â€

Strong called Game Change nonpartisan and added that Republican politicians were very receptive to Recount (â€œJames Baker threw us a premiere,â€ he said). Although the book covers on the entire campaign, including much material on the Obamas, the movie focuses on the McCain-Palin ticket and particularly on the Vice President candidate. Strong and Roach said the choice made sense for the movie because Palinâ€™s rise from political obscurity was one of the great political stories of all time. Julianne Moore plays Palin, Ed Harris plays McCain and Woody Harrelson plays McCainâ€™s campaign chief Steve Schmidt. The actors appeared on the panel today with Strong, while Roach was onscreen via satellite. Moore said she hired a voice coach to help her achieve Palinâ€™s distinct speech patterns. When asked whether playing the controversial politician changed her opinion about the former Alaska governor, Moore said: â€œI have a profound respect for the historical nature of her candidacy.â€ Harrelson, an outspoken democrat, cracked that â€œhe became a Republicanâ€ in the process of researching the role.

During the session, Strong said that the movieâ€™s point is to examine how politics is intersecting with entertainment. â€œA USA Today story referred to the Republican primaries as American Idol,â€ he said. â€œIt doesnâ€™t matter, itâ€™s ephemera, you are supposed to forget the next day.â€ After the panel, Strong told Deadline that the recent Republican debates have set the scene for Game Change to be appreciated. â€œThe debates perfectly express what the film is about â€” seeing the electoral process become a reality,â€ he said. â€œCelebrity is more important than the issues, we wait for the candidates to be voted off the island. I think the 2008 campaign was the birth of that.â€ Asked whether he would have been as willing to take on a Democrat, Strong said: â€œAbsolutely. I was dying to do the John Edwards movie, but Aaron Sorkin swooped in and bought up the rights.â€