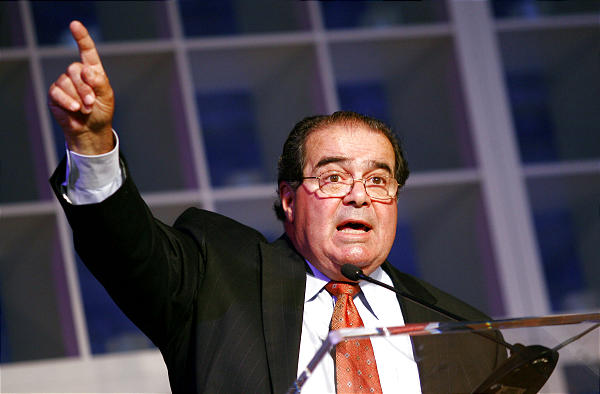 WASHINGTON â€”Â Justice Antonin ScaliaÂ drew unusually critical attention during this pastÂ Supreme CourtÂ term for comments he made in court and in his writing that seemed to some more political than judicial.

His dissent in the Arizona immigration case contained a harsh assessment of the Obama administrationâ€™s immigration policy and prompted a public rebuke from a fellow Republican-appointed judge.

The 76-year-oldÂ ScaliaÂ is a gifted writer with a razor wit and willingness to do battle with those on the other side of an issue. Those qualities have made him a powerful voice, an entertaining presence and a magnet for criticism on theÂ courtÂ for more than 25 years. Even with that vivid background, some ofÂ Scaliaâ€™s recent remarks stood out in the eyes of court observers.

Ten lawyers who appear regularly before theÂ Supreme Court, including two formerÂ ScaliaÂ law clerks, were interviewed for this story and said they too had taken note ofÂ Scaliaâ€™s recent comments. But mindful that they might appear before theÂ high courtÂ or be in a position to submit legal briefs, they all declined to be identified by name.

Measured by wins and losses, the court term did not end well forScalia. He was on the losing end of theÂ courtâ€™s biggest cases involving health care, immigration, lying about military medals and prison sentences, both for crack cocaine offenders and juvenile killers.

The last wordsÂ ScaliaÂ uttered in court this term dealt with his disagreement with theÂ courtâ€™s majority in a decision that watered down Arizonaâ€™s crackdown on illegal immigrants.

Summarizing his views in court,Â ScaliaÂ commented on President Barack Obamaâ€™s recent announcement changing the deportation rules for some children of illegal immigrants. And in his written opinion, he referenced anti-free-black laws of slave states as a precedent for state action on immigration. Both drew critical notice.

â€œThe president said at a news conference that the new program is â€˜the right thing to doâ€™ in light ofÂ Congressâ€˜ failure to pass the administrationâ€™s proposed revision of the Immigration Act. Perhaps it is, though Arizona may not think so. But to say, as theÂ courtÂ does, that Arizona contradicts federal law by enforcing applications of the Immigration Act that the president declines to enforce boggles the mind,â€Â ScaliaÂ said.

The outcry over his reference to Obamaâ€™s announcement was immediate and included a call by liberalÂ Washington PostÂ columnist E.J. Dionne forÂ ScaliaÂ to resign. Conservative JudgeÂ Richard PosnerÂ of the 7th U.S. CircuitÂ Court of Appeals in Chicago, who was appointed by President Ronald Reagan, contributed this passage to Slate magazineâ€™s annual end-of-term discussion:

â€œThese are fighting words. The nation is in the midst of a hard-fought presidential election campaign; the outcome is in doubt. Illegal immigration is a campaign issue. It wouldnâ€™t surprise me ifÂ Justice Scaliaâ€™s opinion were quoted in campaign ads. The program that appallsÂ Justice ScaliaÂ was announced almost two months after the oral argument in the Arizona case. It seems rather a belated development to figure in an opinion in the case,â€ wroteÂ Posner, who had takenÂ ScaliaÂ to task in the past.