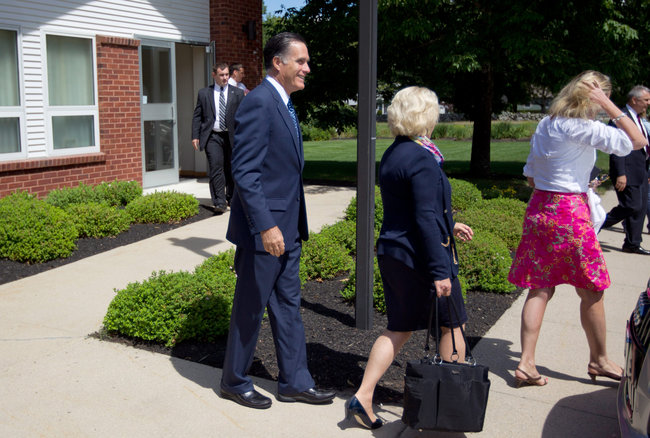 BOSTON â€”Â Mitt RomneyÂ read Scripture from hisÂ iPadÂ as he juggled his 2-year-old grandson on his lap.

He made sure to accept a small piece of white bread and cup of water, representing the flesh and blood of Jesus, from a member of the clergy who looked like he was about to accidentally pass him by.

And with a knowing nod, he encouraged his wife to leave the pew and join the womenâ€™s choir in a rendition ofÂ â€œBecause I Have Been Given Much.â€Â (She did.)

On one level, it was a typical Sunday morning for Mr. Romney, the presumptive Republican presidential nominee and a devoted churchgoer. But on another level, his Sunday observance was an extraordinary moment for a candidate who zealously protects his privacy and rarely talks about his Mormon faith.

On Sunday, for the first time since Mr. Romney became a candidate for president, his aides invited members of the news media to accompany him to church services near his lake house in Wolfeboro, N.H., providing the public with a look into one of the most intimate corners of his life and into the rituals of a religion that is frequently misunderstood.

After a year of studiously avoiding all but the most oblique references to Mr. Romneyâ€™s faith on the campaign trail, his advisers said they believe it is time for him to publicly embrace it. They reason that his religious devotion, as well as his leadership within the church, convey qualities that voters will warm to â€” and outweigh any squeamishness among those who are unfamiliar with or suspicious of Mormonism.

The display of openness inside the church was not entirely spontaneous: Mr. Romney agreed a few weeks ago to allow a small group of reporters, known as a protective pool, to track his every moment by airplane or vehicle, a longstanding tradition in presidential campaigns.

But Mr. Romneyâ€™s aides have wide discretion over what events members of the pool may attend, and the campaignâ€™s decision to allow reporters into church was something of a surprise. (His advisers are known to scold reporters whose articles focus on Mr. Romneyâ€™s faith.)

Mr. and Mrs. Romney arrived at the Church of Jesus Christ of Latter-day Saints in Wolfeboro at 10 a.m. with their oldest son, Tagg; his wife, Jennifer; and their six children. On their way in, the family was greeted in the parking lot by an older couple. â€œWelcome back,â€ a woman said, giving Mr. Romney a hug.

Mr. and Mrs. Romney sang along to hymns and took turns holding their grandchildren during the service, which was attended by about 100 people. At times, Mr. Romney flipped through a picture book with his grandson Johnny.