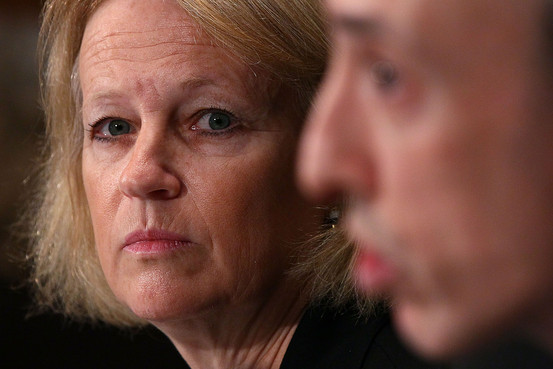 The Securities and Exchange Commission split in its decision to settle its landmark lawsuit against Goldman Sachs, The Wall Street Journal has learned, in a dispute over the agency’s move to levy a $550 million fine even after diluting its fraud allegations against the giant bank.

The 3-2 decision on party lines Thursday came after a 30-minute closed-door session where the SEC’s two Republican commissioners voted against settling, said people familiar with the matter. Mary Schapiro, the SEC chairman appointed by President Obama, cast the deciding vote, the people said.

Thursday’s settlementâ€”in which Goldman agreed to pay a $550 million fine, but didn’t have to admit it committed fraudâ€”capped one of the most closely watched cases in the SEC’s 76-year history. The agency had charged Goldman with intentionally duping clients by selling a mortgage-security product that secretly was designed by another Goldman client betting that the housing market would crash.

People familiar with the matter say Republican Commissioner Kathleen Casey questioned the SEC staff Thursday on their decision to abandon the strongest fraud charge and strike a settlement involving a lesser allegation, and given that, how the SEC could justify such a large penalty on a lesser charge.

The political split over the case comes at a time when the agency remains under fire for its policing of the financial markets during the financial crisis. The SEC commissioners often split on party lines over policy decisions, but rarely do so on such high-profile enforcement cases.

The disclosure of the dispute also raises fresh questions about how strong a case the SEC had against Goldman.

Russell Ryan, a former SEC enforcement lawyer, said the negotiation to drop the strongest fraud charge is “usually a strong indication the SEC had some doubt whether it could prove intentional fraud.”

Mr. Ryan, now a defense lawyer at King & Spalding, said the SEC typically insists a defendant settle on the strongest allegation made in its complaints. Watering down the toughest charge, as in this case, is unusual.

Neither Ms. Casey nor the other Republican commissioner, Troy Paredes, returned calls to comment. Ms. Schapiro, the two other Democratic commissioners and an SEC spokesman declined to comment.