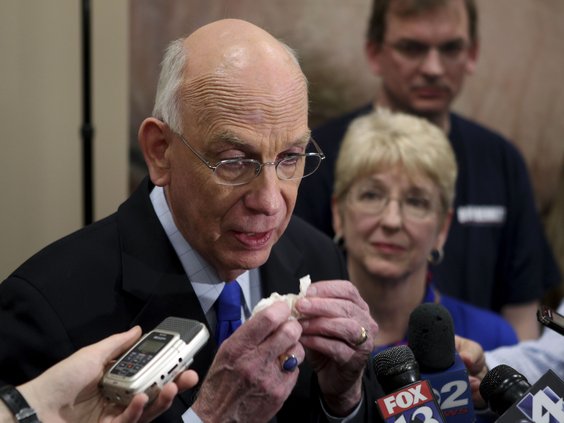 SALT LAKE CITY (AP) — Republican Sen. Bob Bennett was thrown out of office Saturday by delegates at the Utah GOP convention in a stunning defeat for a once-popular three-term incumbent who fell victim to a growing conservative movement nationwide.

Bennett’s failure to make it into Utah’s GOP primary — let alone win his party’s nomination — makes him the first congressional incumbent to be ousted this year and demonstrates the challenges candidates face from the right in 2010.

“The political atmosphere obviously has been toxic, and it’s very clear that some of the votes that I have cast have added to the toxic environment,” Bennett told reporters, choking back tears.

“Looking back on them, with one or two very minor exceptions, I wouldn’t have cast any of them any differently, even if I had known at the time they were going to cost me my career.”

Bennett didn’t answer questions after his loss but earlier Saturday told The Associated Press he wouldn’t rule out a write-in candidacy. State law prohibits him from running as an independent.

“I do think I still have a lot of juice left in me,” Bennett said following his loss. “We’ll see what the future may bring.”

Bennett survived a first round of voting Saturday among roughly 3,500 delegates but was eliminated when he finished a distant third in the second round. He garnered just under 27 percent of the vote, while businessman Tim Bridgewater had 37 percent, and attorney Mike Lee got 36 percent. Lee and Bridgewater will face each other in a June 22 primary after a third round of voting in which neither got the 60 percent necessary to win outright.

“Don’t take a chance on a newcomer,” Bennett had pleaded in his brief speech to the delegates before the second round of voting began. “There’s too much at stake.”

Yet that urging, and Bennett’s endorsements by the National Rifle Association and former presidential candidate Mitt Romney, did little to stave off anger toward the Washington establishment from delegates.

“The bailout bothers me. That in and of itself is unforgivable in my opinion,” said delegate Scott White, a 58-year-old general contractor from Taylorsville.