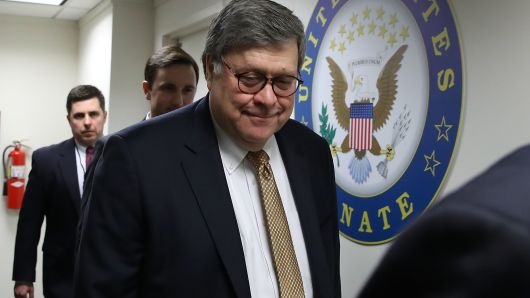 President Donald Trump’s nominee for attorney general, William Barr, was confirmed in the Senate on Thursday to take over the Justice Department, where he will oversee special counsel Robert Mueller’s Russia probe.

Barr, 68, was confirmed in a 54-45 vote that largely fell along party lines. He was sworn in Thursday afternoon in the Oval Office by Supreme Court Chief Justice John Roberts, the White House told NBC News.

Barr was widely expected to be confirmed by the Republican-majority Senate on Thursday. He had served in the same role more than two decades earlier in President George H.W. Bush’s administration, and had passed procedural hurdles in the Senate Judiciary Committee and the full Senate in recent votes.

A few senators broke with their party in the final vote, however. Among Democrats, Sens. Joe Manchin of West Virginia and Doug Jones of Alabama — both of whom represent deep-red states — voted for Barr, as did first-term Arizona Sen. Kyrsten Sinema. Kentucky Sen. Rand Paul was the only Republican to vote against Barr’s nomination.