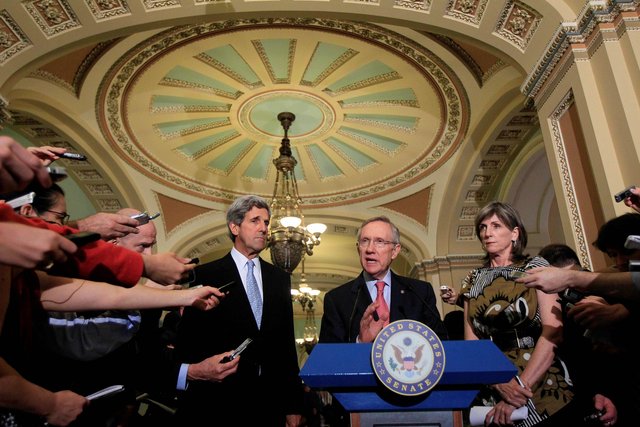 Senate Democrats on Thursday admitted defeat in their drive to pass an ambitious global-warming bill this year that caps greenhouse gases, abandoning a priority of President Obama‘s.

Democrats have been trying for more than a year to pass a plan that charges power plants and other large polluters for their heat-trapping carbon emissions, which contribute to global warming. The House voted 219-212 last year for a “cap-and-trade” plan featuring economic incentives to reduce heat-trapping gases from power plants, vehicles and other sources.

Republicans slammed the bill as a “national energy tax” and jobs-killer, arguing that the costs would be passed on to consumers in the form of higher electricity bills and fuel costs that would lead more manufacturers to take their factories offshore. Moderate House Democrats who voted for the bill, particularly freshmen from Republican-leaning districts, are among the GOP‘s top takeover targets in the November election.

In recent weeks, Senate Democrats floated a more modest approach that would limit the carbon tax to the electricity sector. That plan, which drew support from the White House and words of encouragement from Republican Sen. Olympia J. Snowe of Maine, was never formally proposed. But it, too, failed to attract the 60 votes needed to advance it in the 100-member Senate.

Instead, Mr. Reid and other Democrats said they would focus on a narrower bill that responds to the oil spill in the Gulf of Mexico and improves energy efficiency.

“We’ve always known from Day One that to pass comprehensive energy reform you’ve got to have 60 votes,” Sen. John Kerry, Massachusetts Democrat, said at a Capitol Hill news conference with Mr. Reid and White House energy adviser Carol Browner. “As we stand here today, we don’t have one Republican vote.”

Sen. Lindsey Graham, South Carolina Republican, had been negotiating with Mr. Kerry and Sen. Joe Lieberman, Connecticut independent, for months, but Mr. Graham withdrew his support in May, saying it was impossible to pass the legislation because of disagreements over offshore drilling and efforts by Democratic leaders to focus on an immigration reform bill first.

Ms. Browner said Mr. Obama continues to support a comprehensive bill that includes a cap on carbon emissions but that the president supports Mr. Reid‘s decision to go forward with a narrower bill. For Mr. Obama, the effort to address energy policy and climate change ranked behind only overhauling the nation’s health care system and its financial regulations on his list of priorities coming into office.