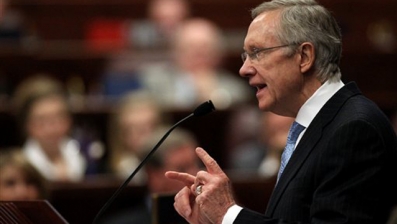 In the face of Republican calls for Democrats to offer a plan of their own for funding the federal government, Senate Majority LeaderÂ Harry Reid unveiled a $1.1 trillion bill which imposes $6.5 billion in new spending cuts — and then promptly declared both it and the rival House GOP proposal dead on arrival.

“Not to spoil the surprise, but we all know how it will turn out. We know neither will reach the president’s desk as read,” Reid predicted Friday, as he set the Senate up for a Tuesday vote on the House-passed bill to fund the government for the remaining seven months of the federal fiscal year.

“We’ll end up back at square one without consensus, without a budget for the rest of this fiscal year, and without assurances that we can keep the country running,” Reid said. “So, once these votes are behind us, and everyone’s voice is heard, I hope each senator and member of Congress will find renewed motivation to do what we needed to do since the beginning, come together, negotiate in good faith.”

As he also sought a vote on the new Democratic alternative, Reid repeatedly called the House GOP legislation “mean-spirited” and “political,” describing the legislative process there as “a mad rush to see who could do the most sensational amendment.”Â The GOP proposal, which passed the House, would have cut $61 billion from 2010 spending levels, while the Democrats’ plan calls for $6.5 billion in new cuts, in addition to a $4 billion reduction agreed to in a bipartisan stopgap bill signed Wednesday by the president.

Republican leaders matched Reid’s dismissive rhetoric with disdain of their own.

Senate Minority LeaderÂ Mitch McConnell called the $6.5 billion in cuts in Reid’s 352-page bill, first announced Thursday with Vice President Biden’s visit toÂ Capitol Hill for negotiations, “little more than one more proposal to maintain the status quo — to give the appearance of action where there is none. This latest proposal is unacceptable, and it’s indefensible.”

House Speaker John Boehner, R-Ohio, clearly on message with McConnell, said, “TheÂ White House and congressional Democrats finally announced their position. Unfortunately, it is little more than the status quo, and the status quo is indefensible and unacceptable.”

The Democratic funding bill includes tens of billions of dollars more than the Republican plan in funding for customs and border security, weapons of mass destruction training, nuclear nonproliferation, theÂ National Park Service, Fish and Wildlife Service, and overseas diplomatic operations, among many other areas. Interestingly, theÂ Army Corps of Engineers, always a highly popular program back home for members, receives more than the president requested.