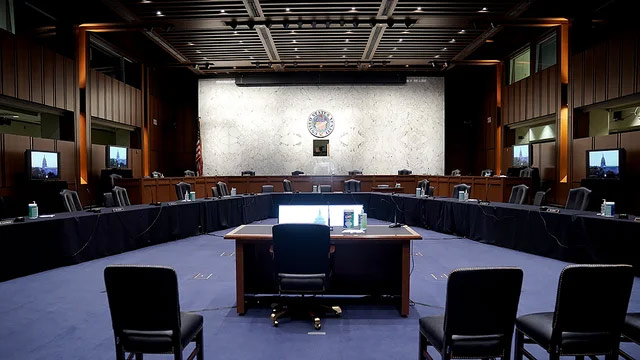 The Senate is teeing off an explosive fight over the future of the Supreme Court just three weeks before Election Day.

Judge Amy Coney Barrett will step into the national spotlight Monday morning when the Senate Judiciary Committee begins a four-day hearing for her nomination to fill the seat left vacant by the death of Justice Ruth Bader Ginsburg.

The battle is the latest twist in an already chaotic election year that has seen an impeachment trial, a global health pandemic, a subsequent recession and, more recently, President Trump and dozens in his orbit becoming infected with the coronavirus.

“We’re in an utterly different context. …We’re in the middle of a pandemic and a public health crisis and a presidential election that has already started,” said Sen. Chris Coons (D-Del.), about the confirmation hearing. “There is no precedent.”

Tensions are already running high among senators, and in the country, just 22 days before the Nov. 3 election, setting a volatile backdrop for a hearing that is expected to touch on hot-button issues like abortion and health care with a nominee who could shape the future of the court for decades.

Sen. John Cornyn (R-Texas), a member of the Judiciary Committee and adviser to Senate Majority Leader Mitch McConnell (R-Ky.), said the fight would be like the political bloodbath that was the 2018 confirmation battle over Justice Brett Kavanaugh but “on steroids.”

Sen. Ted Cruz (R-Texas), another member of the committee, predicted that the hearing would be a “circus.”

With the election looming, Republicans hope the next four days will provide a megaphone to shore up support for GOP Sens. Joni Ernst (Iowa), Thom Tillis (N.C.) and Committee Chairman Lindsey Graham (S.C.) in their tough reelection bids.

Sen. Kamala Harris (D-Calif.) — the Democratic vice presidential nominee known in the Senate for her prosecutorial questioning style — will be under close scrutiny as Republicans hope for any missteps that could be used against Democratic nominee Joe Biden.

Democrats, meanwhile, are preparing to use the national stage to grill Barrett on her positions on issues such as health care, abortion rights and whether she would recuse herself from election-related cases, something she has so far refused to commit to.

Democrats view health care as a favorable issue that allows them to both dig into Barrett’s background and try to go on the attack against Republicans. The Supreme Court is set to hear a case that could determine the fate of the Affordable Care Act a week after the election, providing Democrats with an opening to put it front and center in both their battles for the Senate majority and the White House.

“They are determined to fill Justice Ruth Bader Ginsburg’s seat with a conservative justice as quickly as possible because of the oral arguments on Nov. 10,” Sen. Dick Durbin (D-Ill.) told reporters on a press call. “If they succeed, 20 million Americans would lose their health care.”

Barrett’s views on Roe v. Wade are also getting fresh scrutiny after a 2006 anti-abortion ad signed by Barrett, who was then a professor, was omitted from records provided to the Judiciary Committee.

But Democrats are also eager to avoid giving Republicans any fodder in the final stretch of the election. For that reason, they are expected to avoid raising Barrett’s religion.

“I don’t intend to question her about her personal views, her private religious faith or views. I don’t expect my colleagues will either,” Coons said.

Democrats warn that stumbling onto that political landmine would only feed GOP talking points. Republicans have been eager to point in recent days to an exchange from Barrett’s 2017 circuit court confirmation hearing about her Catholic faith. Sen. Dianne Feinstein (D-Calif.), the ranking member on the committee, told Barrett at the time that “the conclusion one draws is the dogma lives loudly within you,” as she questioned if Barrett would be able to separate her religious views from her job as a judge.

In many ways, the hearing will be unlike any other in modern history. The Capitol has been closed to the public since March, meaning members of the public will not be allowed in the room. That means protesters who lined the hallways and disrupted hearings during the contentious fights over Kavanaugh and Justice Neil Gorsuch will be limited to gathering outside.

Some senators on the committee, including those who recently tested positive for COVID-19, are expected to appear remotely — a first for a Supreme Court hearing.

Democrats have used a recent coronavirus outbreak in Washington to try to build public pressure on Republicans to either delay the hearings or require testing for those in the room after three GOP senators, including two members of the committee, tested positive for the coronavirus. An additional two members, Sens. Ted Cruz (R-Texas) and Ben Sasse (R-Neb.), are self-isolating but have tested negative and are expected to return in person for part or all of the hearings this week.

“We urge you against unsafely moving forward with these hearings while no clear testing regime is in place to ensure that they do not become another super-spreader of this deadly virus,” Democratic Sens. Patrick Leahy (Vt.), Senator Cory Booker (N.J.) and Harris wrote in a letter to Graham on Friday.

Republicans have rejected those requests, arguing they are nothing but a stall tactic and that any senator who wants to participate remotely in the hearings will be able to do so.

“The first item of priority in the Senate is the Supreme Court. We have a stunningly outstanding nominee. We have a process to get through that nomination and we intend to put her on the Supreme Court in the next few weeks,” McConnell told reporters in Kentucky on Friday.

But despite the historic nature of the Supreme Court fight, which would set a new record for the closest to a presidential election a justice has been confirmed, the outcome, absent an eleventh hour surprise, appears pre-baked.

Republicans nixed the 60-vote procedural hurdle for Supreme Court nominees in 2017, meaning Barrett only needs 50 yes votes, plus Vice President Pence to break a tie, if all senators are voting.

Republicans hold 53 seats, meaning McConnell can lose three GOP senators. Only two — Susan Collins (Maine) and Lisa Murkowski (Alaska) — have said they do not believe a nominee should get a vote before the election, and only Collins has specifically pledged that she would vote no if it is brought up before Nov. 3.

Democrats acknowledge that their leverage is limited, and that without the support of four GOP senators they can’t block Barrett from being confirmed. Democrats are planning to boycott the committee votes if GOP senators are absent, in order to deny Republicans the quorum they need to move forward under the rules. Senate Democratic Leader Chuck Schumer (N.Y.) has also hinted they also have procedural levers they could pull to stall the process once Barrett’s nomination hits the floor.

“We will have many more procedural options when it comes to a vote in the Senate committee and a vote on the floor and we will use every tool in the toolbox,” Schumer said during a recent press conference in New York.

But Republicans have set an aggressive timeline to place Barrett on the bench before Nov. 3. Graham is expected to tee up a committee vote for Oct. 22. That would pave a way for a final confirmation vote by Oct. 29, five days before the election.