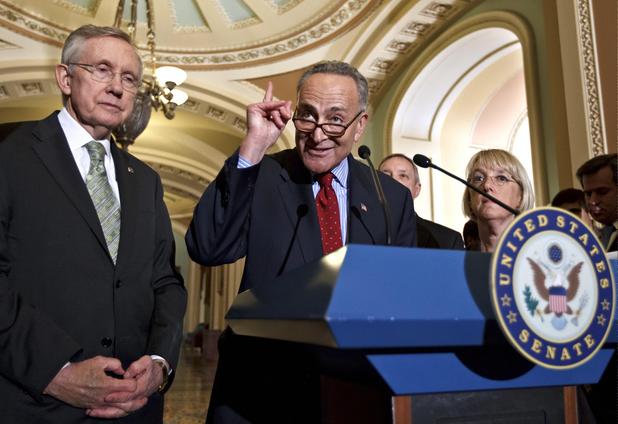 WASHINGTON â€” Democrats pushed a yearlong extension of tax cuts for all but the highest-earning Americans through the Senate on Wednesday, giving President Barack Obama and his party a significant political victory on a measure that is fated to go no further in Congress.Senators approved the Democratic bill by a near party-line 51-48 vote, with Vice President Joe Biden presiding over the chamber in case his vote was needed to break a tie. Minutes earlier, lawmakers voted 54-45 to kill a rival Republican package that would have included the best-off in the tax reductions.
Â The $250 billion Democratic measure would extend tax cuts in 2013 for millions of Americans that otherwise would expire in January. But it would deny those reductions to the earnings of individuals exceeding $200,000 yearly and of couples surpassing $250,000.With control of the White House and Congress at stake in elections less than four months off, passage of the Democratic bill aligned the Senate with Obamaâ€™s tax-cutting vision. Obama has made tax fairness â€” which includes tax increases on the rich â€” an overarching theme of his re-election campaign, and rejection of the measure would have been an embarrassment for the president and Senate Democrats.The vote also served as a counterpoint to the GOP-run House, which next week will approve tax cuts nearly identical to the $405 billion Republican plan the Senate rejected Wednesday. And it lets Democrats argue that only the GOP stands in the way of tax cuts for millions of Americans.

â€œWith the Senateâ€™s vote, the House Republicans are now the only people left in Washington holding hostage the middle-class tax cuts for 98 percent of Americans and nearly every small business owner,â€ Obama said in a written statement after the vote.

â€œThe House will vote next week to stop that tax hike, and until the Senate does the same, the threat to our economy remains,â€ Boehner said in a written statement.

Congressâ€™ nonpartisan Joint Committee on Taxation has said just 3.5 percent of taxpayers with business income filing individual returns would be exposed to higher taxes next year under the Democratic bill. But such taxpayers account for 53 percent of reported business income on those returns.