Senate says no to 6,000 border troops 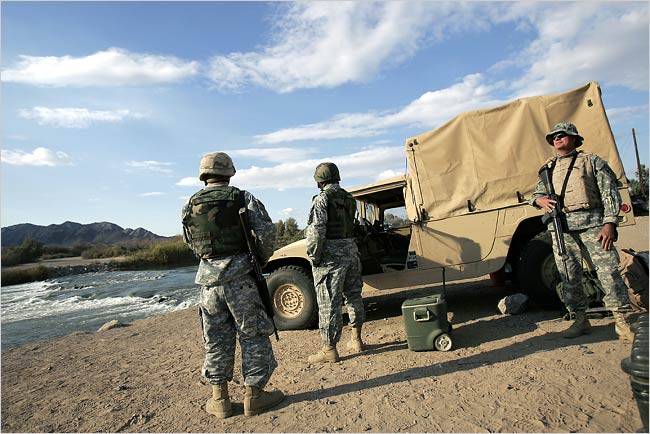 Senate Democrats managed Thursday to block deployment of 6,000 National Guard troops to the U.S.-Mexico border, but the proposal still garnered a majority of senators, showing widespread support for a border-security-first strategy and underscoring why President Obama is having difficulty trying to win an immigration-legalization bill.

The vote flustered Democrats, who seemed uncertain how to handle the proposal and were reluctant to defy Mr. Obama, who just this week proposed that a much smaller 1,200-troop force be deployed.

In the end, 12 Democrats joined 39 Republicans in voting for the deployment – though that still fell nine votes shy of the 60-vote supermajority needed for passage.

The border-security debate was the key fight as the Senate debated the $59 billion emergency war-spending bill to fund Mr. Obama’s Afghanistan troop surge.

Late Thursday, the spending bill passed 67-28, sending it on to be reconciled with a House version.

But that was not before senators defeated a Democratic effort to force Mr. Obama to produce a timetable for withdrawal and Republican efforts to force cuts elsewhere in the budget to pay for the added spending.

“First and foremost, this bill provides the resources needed to support and protect our troops serving in harms way,” said Sen. Daniel K. Inouye, chairman of the Senate Appropriations Committee.

With Democrats holding a giant advantage in the Senate, Republicans were never likely to garner the 60 votes needed to pass the National Guard amendment. But that made the symbolism of the vote all the more significant – a fact that was underscored by Sen. Charles E. Schumer’s pleas on the Senate floor to his colleagues not to defect and vote with Republicans.