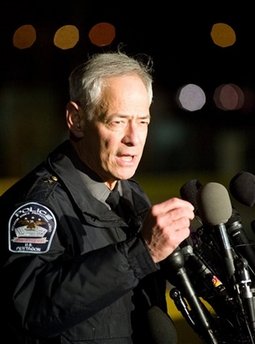 The California man who calmly opened fire on two police officers at an entrance to the Pentagon Thursday appears to have acted alone and was not connected to any terrorist plot, Pentagon police chief Richard S. Keevill said.

The shooter, identified as 36-year-old John Patrick Bedell, was dressed in a business suit and carried two 9-millimeter semi-automatic weapons and “many magazines” of ammunition, Keevill said at a 6 a.m. news conference Friday. “He walked very directly to the officers and engaged,” Keevill said.

The officers, identified as Jeffrey Amos and Marvin Carraway, were superficially wounded, one in the shoulder and one in the thigh. Both were treated at George Washington University Hospital in Northwest Washington and released.