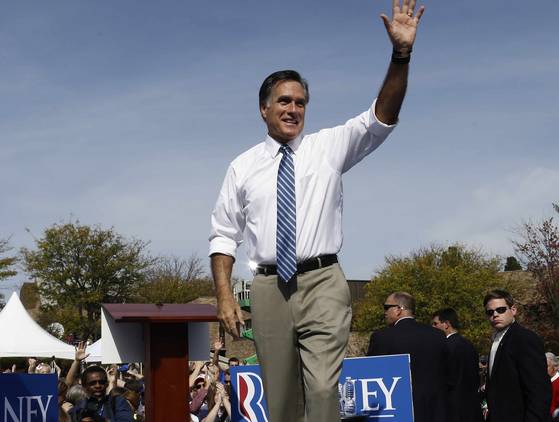 WASHINGTON â€” Mitt Romney leads President Obama by four percentage points among likely voters in the nation’s top battlegrounds, a USA TODAY/Gallup Poll finds, and he has growing enthusiasm among women to thank.

As the presidential campaign heads into its final weeks, the survey of voters in 12 crucial swing states finds female voters much more engaged in the election and increasingly concerned about the deficit and debt issues that favor Romney. The Republican nominee has pulled within one point of the president among women who are likely voters, 48%-49%, and leads by 8 points among men.

The battle for women, which was apparent in the speakers spotlighted at both political conventions this summer, is likely to help define messages the candidates deliver at the presidential debate Tuesday night and in the TV ads they air during the final 21 days of the campaign. As a group, women tend to start paying attention to election contests later and remain more open to persuasion by the candidates and their ads.

That makes women, especially blue-collar “waitress moms” whose families have been hard-hit by the nation’s economic woes, the quintessential swing voters in 2012’s close race.

“In every poll, we’ve seen a major surge among women in favorability for Romney” since his strong performance in the first debate, veteran Democratic pollster Celinda Lake says. “Women went into the debate actively disliking Romney, and they came out thinking he might understand their lives and might be able to get something done for them.”

While Lake believes Obama retains an edge among women voters, the changed views of Romney could be “a precursor to movement” to the Republican candidate, she says. “It opens them up to take a second look, and that’s the danger for Obama.”