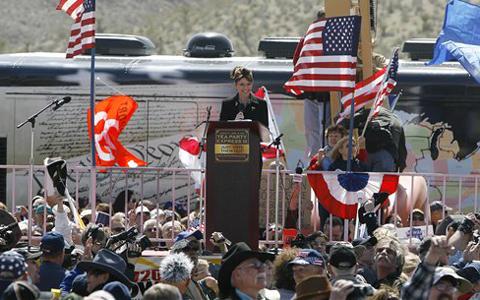 Thousands of so-called Tea Party activists rallied in the hometown of Senate Democratic leader Harry Reid of Nevada Saturday.Â  The Tea Party rally launched a nationwide bus tour for the grassroots conservative group that plans to arrive in Washington on tax day, April 15.

They came by the thousands, from across state lines and across the country, in campers, recreational vehicles and by motorcycle.

With flags that read “Don’t Tread On Me”, Tea Party supporters gathered in a windswept dusty lot in the desert in Searchlight, Nevada, the hometown of Senate Democratic leader Harry Reid.

The featured speaker was former Alaska governor and Republican vice presidential candidate Sarah Palin, who urged the crowd to hold President Obama and the Democrats accountable for the health care plan recently approved by Congress despite unanimous Republican opposition.

“What we are doing, folks, we are rolling up our sleeves and we are getting down to business and getting back to the common sense conservative principles that made this country the greatest country on earth, and we are not going to sit down and shut up,” said Palin.Â  “Thank you for standing up!”

Palin is a favorite of the Tea Party movement, and many carried homemade signs urging her to run for president in 2012.

The rally launching the bus tour drew activists from several neighboring states including California, Arizona, and from as far away as Washington State, including retiree Joe Coleman.

“I support the Tea Party and the program they have, and what they are trying to pass on to the people,” he said.Â  “And I think it is good because a lot of things in the White House and Congress that have taken place right now need to be checked and put under some kind of control.”

June Borders made the hour-long drive down from Las Vegas to lend her support.

“I especially like it because it involves the silent majority that haven’t been involved [in politics] in a long time,” she said.

Some of the local residents in Searchlight did not like the fact that outsiders had come in to target Senator Reid, who faces a difficult re-election bid this year, in part, because of his work in guiding the divisive health care reform bill through Congress.

Verlie Doing has known Harry Reid for decades and has run the Searchlight Nugget Casino and Restaurant for more than 30 years.

“But I totally resent the fact that they have come to Senator Reid’s hometown and targeted him,” she said.Â  “I just don’t think that is the American way.Â  I don’t think so.Â  They are strangers.Â  They don’t know him at all.”

The Tea Party movement is not a political party, but a loose grouping of conservative grass roots activists who oppose the health care bill and taxes and who want to reduce the power of the federal government.Â  The name was inspired by the Boston Tea Party tax protest against the British in 1773.

The Tea Party activists are generally targeting Democrats and supporters of President Obama in their rallies, though some critics find their rhetoric harsh and, in some cases, threatening.

The Tea Party express bus tour will make its way to Washington over the next several weeks and plans to arrive in the nation’s capital for a rally on April 15, the national deadline day for citizens to file their annual income tax returns.