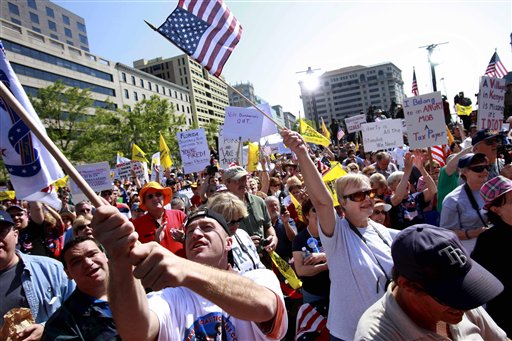 Leaders of the Tea Party Patriots are planning a rally in Washington, D.C. next week to protest House Republicans’ willingness to compromise on spending cuts in the federal budget and demand that Republicans “make the tough decisions we sent them there to make.”

“On Thursday, March 31, 2011, Tea Party Patriots will be holding a Continuing Revolution Rally on the East Side of the Capitol Building from noon to 1:30pm,” reads aÂ note on the group’s Facebook page. “While the Congress continues ‘business-as-usual’ with their short term continuing resolutions, we will be there to Continue our Tea Party Revolution and demand they make the tough decisions we sent them there to make.”

Mark Meckler, co-founder and National Coordinator of the Tea Party Patriots, told CBS News the rally is intended to hold Republicans to a series of campaign pledges – including the Republican “Pledge to America,” which promised to cut $100 billion from the federal budget in the 2011 fiscal year.

“The point of the rally is to do as we promised: stand with the people who are willing to make the hard choices and do the difficult work of getting spending and debt under control,” Meckler told Hotsheet. “There are 54 people who voted against the short term [continuing resolution to fund the government], and they need to know we stand with them. For those that voted for it, we need them to know we are here, and we want them to join with the 54 and do the right thing, instead of the easy, short term thing. So this rally is intended as both a carrot and a stick.”

House Republicans passed a spending bill in March that would have cut $61 billion from the budget, but it failed in the Democrat-controlled Senate. Democrats and Republicans have since compromised on a pair of short-term spending bills (or continuing resolutions) to fund the government while they continue negotiations on a long-term budget.

Meckler argues that rather than compromise, Republicans should let the chips fall where they may in the face of a budget stalemate.

“It’s important that folks understand that this is the President Obama/ Harry Reid shutdown,” he said. “The Republicans passed a [bill] out of the House that included $61 billion in cuts. If Harry Reid can’t pass that in the Senate, and the President won’t sign it, any consequences belong to them. They are obstructing the will of the people to get serious about cutting spending.”

A spokesman for House Speaker John Boehner argues that Republicans are doing the best they could in the face of a Democrat majority in the Senate.