The death knell for unions? Supreme Court gets to decide 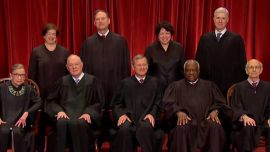 A $45 monthly fee could end up costing big labor billions. Public unions are getting nervous, while those who don’t like how they operate are claiming the free lunch may be over soon.

An explosive case regarding government employees and the First Amendment that the Supreme Court will hear on Feb. 26 could redefine the relationship between public unions and workers.

Petitioner Mark Janus works at the Illinois Department of Healthcare and Family Services and didn’t like that a certain amount was deducted from his paycheck — he didn’t believe he should be forced to pay union dues or fees just to be allowed to work for the state. He didn’t agree with the 1.3 million-member AFSCME union’s politics, and so believed, under the First Amendment, he couldn’t be forced to contribute.

In his court filing, Janus quotes Thomas Jefferson, who said to “compel a man to furnish contribution of money for the propagation of opinions which he disbelieves, is sinful and tyrannical.”