The Kochs fight back 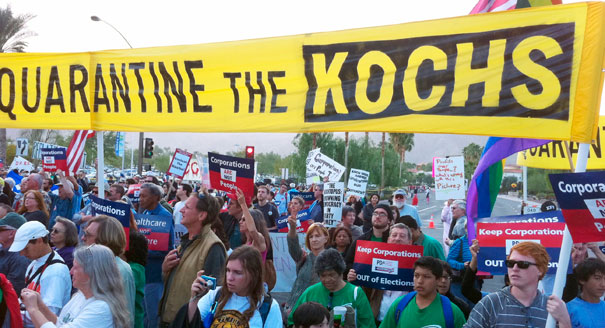 RANCHO MIRAGE, Calif. â€“ Faced with an avalanche of bad publicity after years of funding conservative causes in relative anonymity, the billionaire industrialist Koch brothers, Charles and David, are fighting back.

Theyâ€™ve hired a team of PR pros with experience working for top Republicans including Sarah Palin and Arnold Schwarzenegger to quietly engage reporters to try to shape their Koch coverage, and commissioned sophisticated polling to monitor any collateral damage to the image of their company, Koch Industries.

At the same time, through their high-priced lawyers, private security detail and influential allies in conservative politics and media, the Kochs have played hard ball with critics and suspected foes.

Young environmental activists who pranked them have been hit with a lawsuit seeking more than $100,000 in damages, and the leak of an internal document describing their political activities resulted in an investigation â€“ complete with document analysis and interviews of suspects â€“ that eventually identified the mole.

Both their new openness and their aggressive â€“ and sometimes secretive â€“ tactics were on display before and during the Kochsâ€™ closed-door, invitation-only four-day annual winterÂ meeting of conservative donors and leaders that concluded Tuesday with a breakfast at the pricey resort that hosted it here in the Palm Springs suburbs.

On the one hand, the Kochs asked a handful of participants to talk to POLITICO about the conference, marking the first time the company has waived the strict confidentiality rules surrounding its donor meetings, which have been taking place twice a year since 2003, but had attracted almost no attention until this yearâ€™s.

â€œYou know why theyâ€™re being scrutinized, donâ€™t you?â€ askedÂ Herman Cain, a former pizza company CEO and long-shot 2012 GOP presidential candidate who has attended four Koch conferences, including the one that concluded today.

And, in another shift, Kochâ€™s PR representatives reached out to reporters, largely in response to aÂ raucous rally outside the resort gates that vilified the Kochs as personifying a corrupt political system â€“ and that resulted inÂ the arrests of 25 proteste rs.

On the other hand, the Kochs retained a heavy private security detail, which tracked resort guests deemed â€œsuspicious,â€Â erected a blockade Saturday to block a documentary camera crew from filming arriving guests, and removed a POLITICO reporter from the resort cafÃ© under threat of arrest.

The pushback began in earnest last summer, when the brothers,Â longtime supporters of libertarian think tanks, started coming underÂ intense scrutiny for their role in helping start and fund some of the deepest-pocketed groups involved in organizing the tea party movement, and for steering cash towards efforts to target President Barack Obama, his health care overhaul, and congressional Democrats in the run-up to the 2010 election.

In media appearances, Van Hollen even spelled out the previously little-known brothersâ€™ last name, saying on Al Huntâ€™s Bloomberg News television show that â€œAmericans for Prosperity which are the Koch Industries, k-o-c-h (are) like the third wealthiest people in the country,â€ while in a background conference call with reporters a senior administration official suggested Koch Industries might be avoiding corporate taxes â€“ prompting outrage from the Kochs’ allies andÂ calls for an investigation from GOP Senators, who contended the White House may have illegally accessed the companyâ€™s tax information.